IL-11 and its receptor, IL-11Ra, are expressed in human cancers; however, the functional role of IL-11 in tumor progression is not known. We found that is a hypoxia-inducible, VHL-regulated gene in human cancer cells and that expression of mRNA was dependent, at least in part, on HIF-1. A cooperative interaction between HIF-1 and AP-1 mediated transcriptional activation of the promoter. Additionally, we found that human cancer cells expressed a functional IL-11Ra subunit, which triggered signal transduction either by exogenous recombinant human IL-11 or by autocrine production of IL-11 in cells cultured under hypoxic conditions. Silencing of dramatically abrogated the ability of hypoxia to increase anchorage-independent growth and significantly reduced tumor growth in xenograft models. Notably, these results were phenocopied by partial knockdown of in a human prostate cancer cell line (PC3), suggesting that this pathway may play an important role in mediating the effects of IL-11 under hypoxic conditions. In conclusion, these results identify as an oxygen- and VHL-regulated gene and provide evidence of a pathway “hijacked” by hypoxic cancer cells that may contribute to tumor progression.

is a hypoxia-inducible gene. 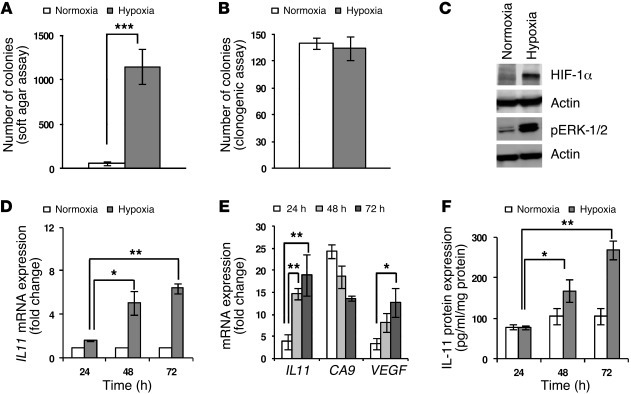