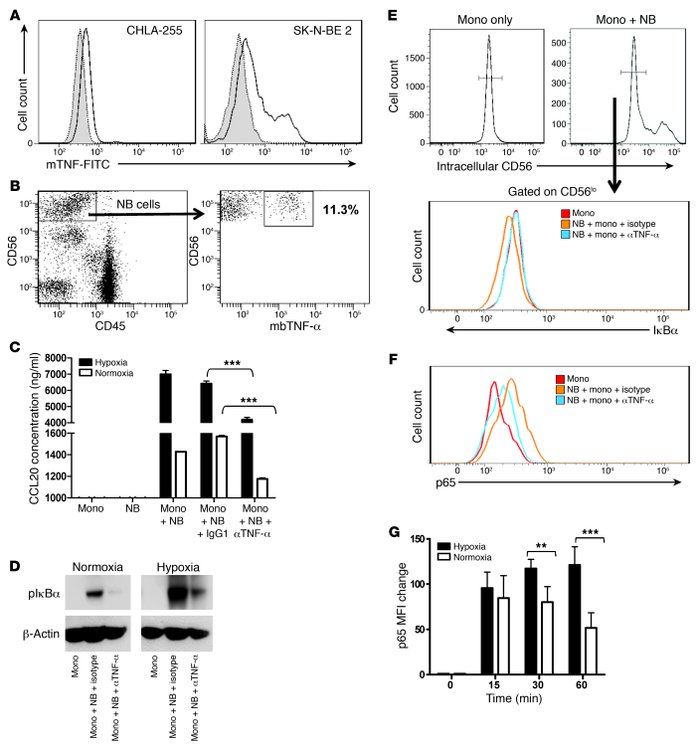 () Cultured NB cells were suspended using 2% EDTA without trypsin and analyzed by FACS for cell surface expression of mbTNF-α in 2 representative NB cell lines (shaded, isotype control; open, anti–mbTNF-α). () Cell suspensions from freshly resected primary NB tumors were stained for surface markers. mbTNF-α expression on NB cells was analyzed after gating on CD56hiCD45– events. () NB cells were preincubated with 50 ng/ml anti-human TNF-α or isotype control mAb for 1 hour before addition of monocytes; NB and monocytes alone were used as controls. CCL20 concentration in the culture supernatant was determined by ELISA after 36 hours. Results are mean ± SD from 3 experiments in triplicate. *** < 0.001, 1-way ANOVA. () Monocytes were cultured alone in nonadherent plates or on top of NB cell monolayer, with addition of anti–TNF-α or isotype control mAb, in normoxia or hypoxia for 16 hours followed by monocyte detachment and Western blotting for phospho-IκBα using β-actin as a loading control. Data are from a representative of 3 experiments. ( and ) The same experiment as in was followed by intracellular staining for () IκBα or () phospho-p65 in monocytes after gating out NB cells as CD56hi events. () Kinetics of phospho-p65 expression in monocytes upon coculture with NB cells in normoxic and hypoxic conditions. Results are mean ± SD from 2 experiments in triplicate. ** < 0.01; *** < 0.001.