Arthrogryposis multiplex congenita (AMC) is characterized by fixed joint contractures and other deformities, sometimes resulting in fetal death. The cause is unknown in most cases, but some women with fetuses affected by severe AMC have serum antibodies that inhibit fetal acetylcholine receptor (AChR) function, and antibodies to fetal antigens might play a pathogenic role in other congenital disorders. To investigate this possibility, we have established a model by injecting pregnant mice with plasma from four anti-AChR antibody–positive women whose fetuses had severe AMC. We found that human antibodies can be transferred efficiently to the mouse fetus during the last few days of fetal life. Many of the fetuses of dams injected with AMC maternal plasmas or Ig were stillborn and showed fixed joints and other deformities. Moreover, similar changes were found in mice after injection of a serum from one anti-AChR antibody–negative mother who had had four AMC fetuses. Thus, we have confirmed the role of maternal antibodies in cases of AMC associated with maternal anti-AChR, and we have demonstrated the existence of pathogenic maternal factors in one other case. Importantly, this approach can be used to look at the effects of other maternal human antibodies on development of the fetus. 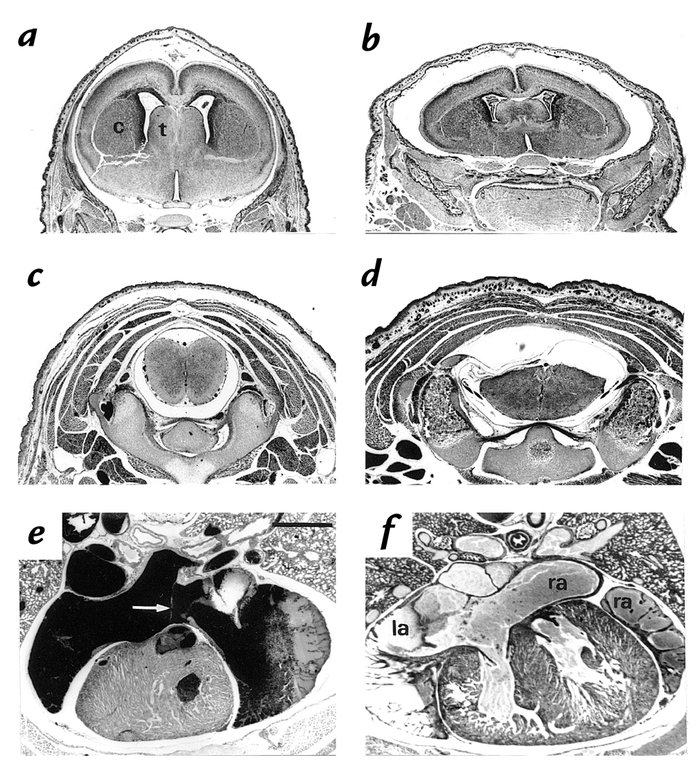 Internal abnormalities in mouse fetuses (, , and ) compared with healthy plasma-injected ( and ) or noninjected () fetuses. ( and ) Coronal sections of the forebrain at the level of the striatum, caudate nucleus, and thalamus; all the normal structural features are present in the affected fetus (nongravid MG plasma–injected; ), but the brain is dorsoventrally compressed and reduced in size. ( and ) Transverse sections of the neck at the atlas/axis level; the affected fetus (AMC-M6–injected; ) shows an Arnold-Chiari–like malformation with the medulla oblongata herniated into the spinal canal. ( and ) Transverse sections of the heart. The affected fetus (AMC-M7–injected; ) shows an atrial septal defect. , head of caudate nucleus; , left atrium; , right atrium; , thalamus. 1 μm.