Mutations in the gene encoding the p110α subunit of PI3K (PIK3CA) that result in enhanced PI3K activity are frequently observed in human cancers. To better understand the role of mutant PIK3CA in the initiation or progression of tumorigenesis, we generated mice in which a PIK3CA mutation commonly detected in human cancers (the H1047R mutation) could be conditionally knocked into the endogenous Pik3ca locus. Activation of this mutation in the mouse ovary revealed that alone, Pik3caH1047R induced premalignant hyperplasia of the ovarian surface epithelium but no tumors. Concomitantly, we analyzed several human ovarian cancers and found PIK3CA mutations coexistent with KRAS and/or PTEN mutations, raising the possibility that a secondary defect in a co-regulator of PI3K activity may be required for mutant PIK3CA to promote transformation. Consistent with this notion, we found that Pik3caH1047R mutation plus Pten deletion in the mouse ovary led to the development of ovarian serous adenocarcinomas and granulosa cell tumors. Both mutational events were required for early, robust Akt activation. Pharmacological inhibition of PI3K/mTOR in these mice delayed tumor growth and prolonged survival. These results demonstrate that the Pik3caH1047R mutation with loss of Pten is enough to promote ovarian cell transformation and that we have developed a model system for studying possible therapies.

results in increased PI3K activity and functional changes in MEFs. 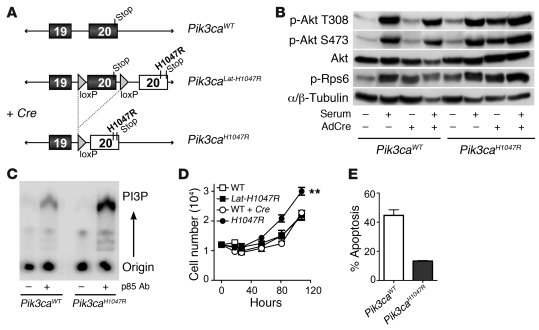 () Schematic of the conditional allele. () Protein blot in AdCre-treated (+) and untreated (–) and MEFs with (+) and without (–) 5-minute serum stimulation. () MEFs from or mice were infected with AdCre, and PI3K was immunoprecipitated using an anti-p85 antibody. PI3K activity in the immunoprecipitates was assayed using phosphatidylinositol (PI) as substrate. Phosphorylated lipids were separated by thin-layer chromatography and visualized by phosphoimager. () MEFs from and mice before or after AdCre infection were cultured and cells counted (** < 0.05 versus WT). () Apoptosis was assessed using annexin V after 72 hours serum deprivation. Results are mean ± SEM; 3 independent MEF preparations.