Restricted overexpression of mutant human TDP-43 (hTDP-43) in neurons is achieved in rats. 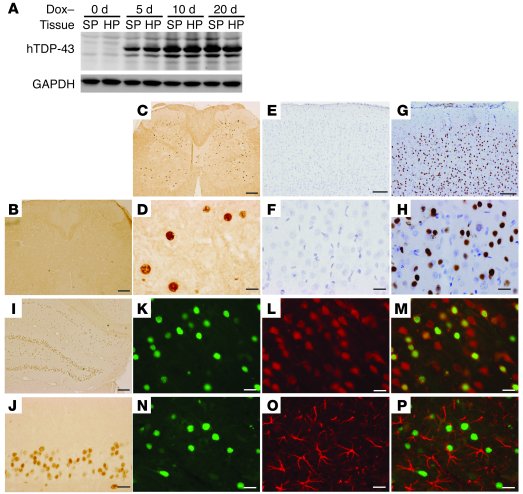 () Immunoblotting showed that the hTDP-43 transgene was expressed in the spinal cord (SP) and hippocampus (HP) of NEF-tTA/TRE–TDP-43M337V double-transgenic rats soon after Dox was withdrawn (Dox–). The rats were deprived of Dox at the age of 60 days. Equal loading was confirmed by probing the same membrane with an antibody to GAPDH. (–) Human TDP-43 immunoreactivity was examined in the spinal cord (–), cortex (–), and hippocampus ( and ) of NEF-tTA/TRE–TDP-43M337V double-transgenic (, , and –) and NEF-tTA single-transgenic (, , and ) rats. Coronal sections of neocortex were counterstained lightly with hematoxylin to display the nuclei (–). (–) Double-label fluorescence staining revealed that human TDP-43 (green, , , , and ) was colocalized with the neuronal marker NeuN (red, and ), but was not colocalized with the astrocyte marker GFAP (red: and ) in the cortex. Rats were examined 10 days after Dox withdrawal. Scale bars: 200 μm (, , and ); 100 μm ( and ); 20 μm (, , , and –).