IgE-mediated activation of mast cells and basophils underlies allergic diseases such as asthma. Histamine-releasing factor (HRF; also known as translationally controlled tumor protein [TCTP] and fortilin) has been implicated in late-phase allergic reactions (LPRs) and chronic allergic inflammation, but its functions during asthma are not well understood. Here, we identified a subset of IgE and IgG antibodies as HRF-interacting molecules in vitro. HRF was able to dimerize and bind to Igs via interactions of its N-terminal and internal regions with the Fab region of Igs. Therefore, HRF together with HRF-reactive IgE was able to activate mast cells in vitro. In mouse models of asthma and allergy, Ig-interacting HRF peptides that were shown to block HRF/Ig interactions in vitro inhibited IgE/HRF-induced mast cell activation and in vivo cutaneous anaphylaxis and airway inflammation. Intranasally administered HRF recruited inflammatory immune cells to the lung in naive mice in a mast cell– and Fc receptor–dependent manner. These results indicate that HRF has a proinflammatory role in asthma and skin immediate hypersensitivity, leading us to suggest HRF as a potential therapeutic target.

Mapping IgE-binding sites within HRF and inhibition of HRF-IgE interactions by the HRF-derived N19 and H3 peptides. 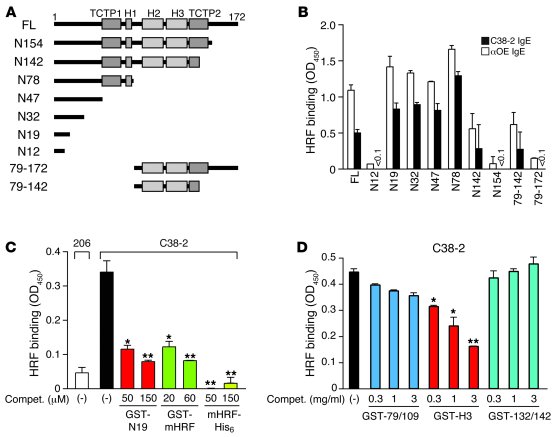 () Scheme of full-length (FL) and truncated forms of GST-mHRF used for binding assays. Domain structures such as TCTP1–TCTP2 and H1–H3 are shown. () IgE-binding site mapping. C38-2 (5 μg/ml) and αOE (20 μg/ml) IgE molecules were incubated in wells coated with GST-mHRF. Bound Igs were detected by ELISA. <0.1, value too small to display. () Inhibition of HRF-Ig interactions by N19. IgE molecules were incubated in GST-mHRF–coated wells in the presence or absence of the indicated concentrations of competitors. After incubation, bound IgE was detected by ELISA. () Inhibition of HRF-Ig interactions by GST-H3. * < 0.05, ** < 0.01. Data are representative of 2 (), 5 (), or 3 () experiments.