Allergic asthma is the most common form of asthma, affecting more than 10 million Americans. Although it is clear that mast cells have a key role in the pathogenesis of allergic asthma, the mechanisms by which they regulate airway narrowing in vivo remain to be elucidated. Here we report that mice lacking αvβ6 integrin are protected from exaggerated airway narrowing in a model of allergic asthma. Expression microarrays of the airway epithelium revealed mast cell proteases among the most prominent differentially expressed genes, with expression of mouse mast cell protease 1 (mMCP-1) induced by allergen challenge in WT mice and expression of mMCP-4, -5, and -6 increased at baseline in β6-deficient mice. These findings were most likely explained by loss of TGF-β activation, since the epithelial integrin αvβ6 is a critical activator of latent TGF-β, and in vitro–differentiated mast cells showed TGF-β–dependent expression of mMCP-1 and suppression of mMCP-4 and -6. In vitro, mMCP-1 increased contractility of murine tracheal rings, an effect that depended on intact airway epithelium, whereas mMCP-4 inhibited IL-13–induced epithelial-independent enhancement of contractility. These results suggest that intraepithelial activation of TGF-β by the αvβ6 integrin regulates airway responsiveness by modulating mast cell protease expression and that these proteases and their proteolytic substrates could be novel targets for improved treatment of allergic asthma.

Protection of β6 KO mice from allergen-induced AHR, but not inflammation or remodeling. 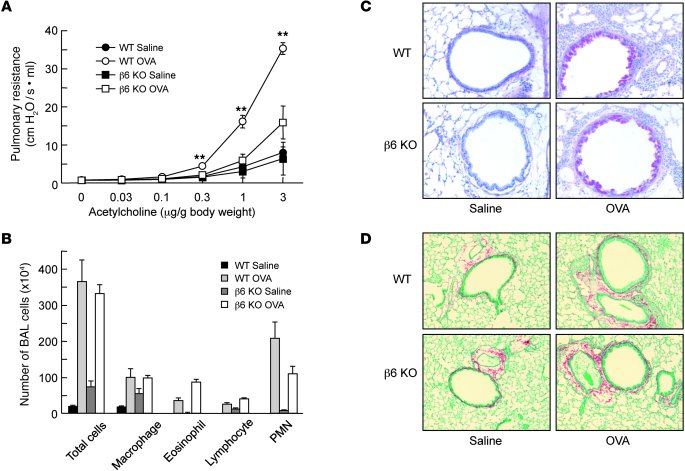 () Pulmonary resistance in response to a range of concentrations of intravenous acetylcholine in WT or β6 KO mice after sensitization and challenge with OVA or saline. Data are mean ± SEM; = 6–9 per group. ** < 0.01 vs. β6 KO OVA. () Counts for macrophages, eosinophils, lymphocytes, and polymorphonuclear leukocytes (PMN) in BAL fluid ( = 6–9). () Periodic acid–Schiff staining for mucus in representative lung sections. Magenta-staining epithelial cells are positive for mucus. Original magnification, ×200. () Sirius red staining for fibrosis in representative lung sections. Original magnification, ×100. Results are representative of at least 3 individual experiments.