In hematologic diseases, such as sickle cell disease (SCD) and hemolytic uremic syndrome (HUS), pathological biophysical interactions among blood cells, endothelial cells, and soluble factors lead to microvascular occlusion and thrombosis. Here, we report an in vitro “endothelialized” microfluidic microvasculature model that recapitulates and integrates this ensemble of pathophysiological processes. Under controlled flow conditions, the model enabled quantitative investigation of how biophysical alterations in hematologic disease collectively lead to microvascular occlusion and thrombosis. Using blood samples from patients with SCD, we investigated how the drug hydroxyurea quantitatively affects microvascular obstruction in SCD, an unresolved issue pivotal to understanding its clinical efficacy in such patients. In addition, we demonstrated that our microsystem can function as an in vitro model of HUS and showed that shear stress influences microvascular thrombosis/obstruction and the efficacy of the drug eptifibatide, which decreases platelet aggregation, in the context of HUS. These experiments establish the versatility and clinical relevance of our microvasculature-on-a-chip model as a biophysical assay of hematologic pathophysiology as well as a drug discovery platform.

The microvasculature on a chip as an in vitro model for HUS. 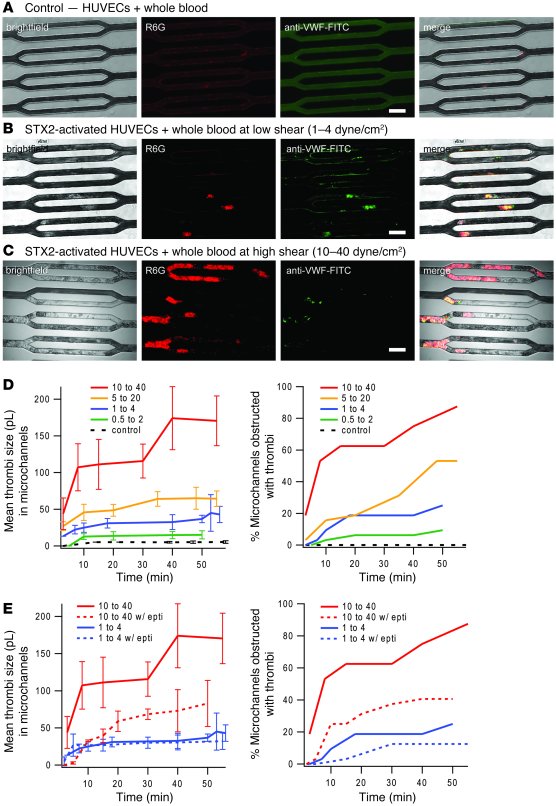 (–) HUVECs cultured to confluence in the microdevice were exposed to 30 pM STX2, a toxin that causes the hematologic manifestations of typical HUS, for 20 to 24 hours, and then whole blood containing STX2, R6G, and anti–vWF-FITC was flowed into the system at initial low shear (1–4 dyne/cm2) and high shear stresses (10–40 dyne/cm2). Compared with the control conditions (), in which neither the endothelial cells nor whole blood was exposed to STX2, STX2 exposure led to the formation of thrombi consisting of leukocytes, platelets, and vWF, which occluded microchannels. This effect was more prominent at high shear () than low shear (). () Multiple experiments using the same concentrations of STX2 were conducted at varying initial shear stress values. Thrombi volume ( = 32 microchannels/device), as measured using multiple confocal microscopy planes, and the percentage of microchannel occlusion due to STX2 exposure were shown to be shear dependent. () The addition of eptifibatide, a glycoprotein IIb/IIIa antagonist that inhibits platelet aggregation, in whole blood attenuated STX2-induced thrombi formation and microchannel obstruction. Interestingly, this effect was more pronounced at higher shear. All error bars represent SD. Scale bars: 80 μm.