Zinc deficiency can be an inherited disorder, in which case it is known as acrodermatitis enteropathica (AE), or an acquired disorder caused by low dietary intake of zinc. Even though zinc deficiency diminishes cellular and humoral immunity, patients develop immunostimulating skin inflammation. Here, we have demonstrated that despite diminished allergic contact dermatitis in mice fed a zinc-deficient (ZD) diet, irritant contact dermatitis (ICD) in these mice was more severe and prolonged than that in controls. Further, histological examination of ICD lesions in ZD mice revealed subcorneal vacuolization and epidermal pallor, histological features of AE. Consistent with the fact that ATP release from chemically injured keratinocytes serves as a causative mediator of ICD, we found that the severe ICD response in ZD mice was attenuated by local injection of soluble nucleoside triphosphate diphosphohydrolase. In addition, skin tissue from ZD mice with ICD showed increased levels of ATP, as did cultured wild-type keratinocytes treated with chemical irritants and the zinc-chelating reagent TPEN. Interestingly, numbers of epidermal Langerhans cells (LCs), which play a protective role against ATP-mediated inflammatory signals, were decreased in ZD mice as well as samples from ZD patients. These findings suggest that upon exposure to irritants, aberrant ATP release from keratinocytes and impaired LC-dependent hydrolysis of nucleotides may be important in the pathogenesis of AE. 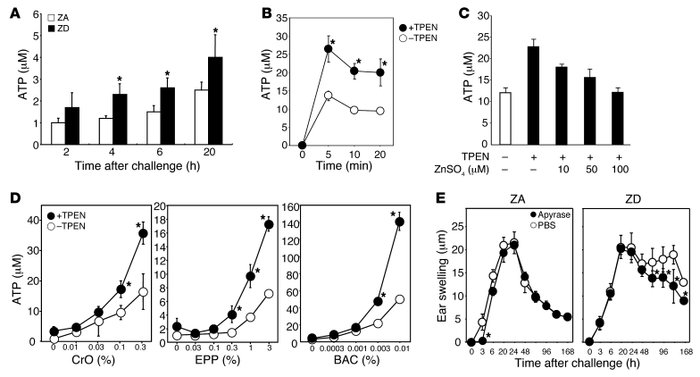 () 1% CrO was painted on the ears of ZA (white bars) and ZD (black bars) mice ( = 5), and skin samples were taken at the indicated time points. ATP secretion from skin organ cultures was quantified. (–) Pam-212 keratinocytes were treated with ( and ) 0.3% CrO or () titrated concentrations of CrO, EPP, or BAC in the presence (black circles/bars) or absence (white circles/bars) of 2 μM TPEN. ATP in the culture supernatants was quantified at () the indicated time points or ( and ) 10 minutes after stimulation. () Cells were cultured with 10–100 μM ZnSO4. * < 0.05, compared with cells that were not treated with TPEN. () ICD responses to CrO were induced, as described in Figure . ZA and ZD mice ( = 5) received local injections of potato apyrase on the right ear (black circles) or PBS alone on the left ear (white circles) before and after CrO application to both ears. The data shown are the swelling responses (mean ± SD). * < 0.05, between the apyrase and PBS treatments. Data are representative of 3 independent experiments.