Intestinal carcinogenesis: IKK can go all the way

Intestinal carcinogenesis: IKK can go all the way

Chronic inflammation has long been suspected to support tumorigenesis in a variety of cancers. The IκB kinase (IKK)/NF-κB pathway is the critical signal transduction pathway regulating inflammation, and loss-of-function studies have demonstrated its involvement in tumorigenesis. In this issue of the JCI, Vlantis et al. present evidence that persistent genetic activation of IKK/NF-κB signaling in intestinal epithelial cells not only accelerates tumorigenesis in models of both carcinogen- and mutation-induced colorectal cancer, but also is sufficient to induce intestinal tumors.

IKK/NF-κB signaling as a key mediator of intestinal inflammation and tumorigenesis. 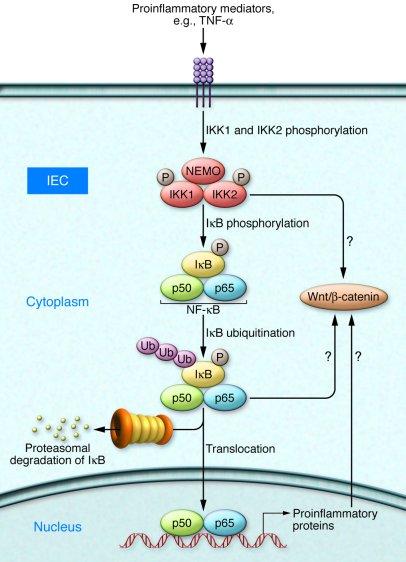 Proinflammatory cytokines, such as TNF-α, trigger phosphorylation and activation of the IKK complex, which is composed of two catalytic kinase subunits (IKK1 and IKK2) and the regulatory subunit NEMO. As a consequence, the inhibitory protein IκB is phosphorylated, ubiquitinated, and then degraded by the proteasome. The NF-κB dimer (e.g., p50 and p65) translocates into the nucleus and regulates target gene expression. Vlantis et al. overexpressed constitutively active IKK2 in IECs (). This led to inflammation (immune cell infiltration) and tumorigenesis via intrinsic and paracrine mechanisms. As depicted here, they found that overexpression of constitutively active IKK2 led to activation of the Wnt/β-catenin pathway. However, it is not yet clear how this is regulated (directly via IKK or indirectly via NF-κB or NF-κB target genes).