Congenital hyperinsulinism (CHI) is the major cause of persistent neonatal hypoglycemia. CHI most often occurs due to mutations in the ABCC8 (which encodes sulfonylurea receptor 1) or KCNJ11 (which encodes the potassium channel Kir6.2) gene, which result in a lack of functional KATP channels in pancreatic β cells. Diffuse forms of CHI (DiCHI), in which all β cells are abnormal, often require subtotal pancreatectomy, whereas focal forms (FoCHI), which are characterized by localized hyperplasia of abnormal β cells, can be cured by resection of the lesion. Here, we characterized the in vitro kinetics of insulin secretion by pancreatic fragments from 6 DiCHI patients and by focal lesion and normal adjacent pancreas from 18 FoCHI patients. Responses of normal pancreas were similar to those reported for islets from adult organ donors. Compared with normal pancreas, basal insulin secretion was elevated in both FoCHI and DiCHI tissue. Affected tissues were heterogeneous in their secretory responses, with increased glucose levels often producing a rapid increase in insulin secretion that could be followed by a paradoxical decrease below prestimulatory levels. The KATP channel blocker tolbutamide was consistently ineffective in stimulating insulin secretion; conversely, the KATP channel activator diazoxide often caused an unanticipated increase in insulin secretion. These observed alterations in secretory behavior were similar in focal lesion and DiCHI tissue, and independent of the specific mutation in ABCC8 or KCNJ11. They cannot be explained by classic models of β cell function. Our results provide insight into the excessive and sometimes paradoxical changes in insulin secretion observed in CHI patients with inactivating mutations of KATP channels.

DiCHI and FoCHI pancreas: morphological aspect and expression in islets. 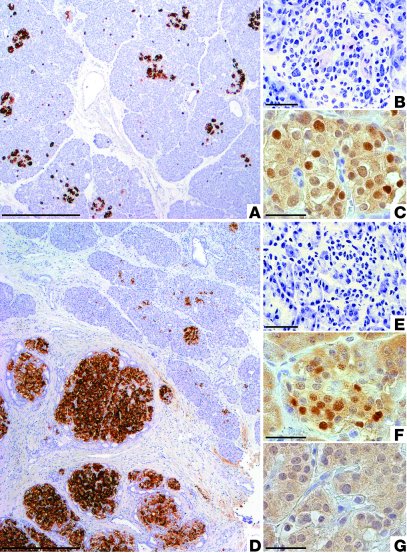 The pancreas of representative cases of DiCHI () and FoCHI () patients were postoperatively immunostained for insulin. DiCHI does not show obvious changes in islet number or size, whereas FoCHI is characterized by a localized adenomatous hyperplasia of β cells. Peroperative diagnosis of DiCHI on frozen sections is based on the presence of β cells with a large nucleus and abundant clear cytoplasm (, toluidine staining). In FoCHI, islets outside the lesion are small and contain β cells with a relatively small nucleus and scanty cytoplasm (). CDKN1C (p57) peptide is present in several cells of all DiCHI islets (, dark brown nuclei) and islets located outside the lesion in FoCHI (), but it is absent from the focal lesion (). Scale bars: 500 μm ( and ); 25 μm (, , –).