The enteric nervous system (ENS) in mammals forms from neural crest cells during embryogenesis and early postnatal life. Nevertheless, multipotent progenitors of the ENS can be identified in the adult intestine using clonal cultures and in vivo transplantation assays. The identity of these neurogenic precursors in the adult gut and their relationship to the embryonic progenitors of the ENS are currently unknown. Using genetic fate mapping, we here demonstrate that mouse neural crest cells marked by SRY box–containing gene 10 (Sox10) generate the neuronal and glial lineages of enteric ganglia. Most neurons originated from progenitors residing in the gut during mid-gestation. Afterward, enteric neurogenesis was reduced, and it ceased between 1 and 3 months of postnatal life. Sox10-expressing cells present in the myenteric plexus of adult mice expressed glial markers, and we found no evidence that these cells participated in neurogenesis under steady-state conditions. However, they retained neurogenic potential, as they were capable of generating neurons with characteristics of enteric neurons in culture. Furthermore, enteric glia gave rise to neurons in vivo in response to chemical injury to the enteric ganglia. Our results indicate that despite the absence of constitutive neurogenesis in the adult gut, enteric glia maintain limited neurogenic potential, which can be activated by tissue dissociation or injury. 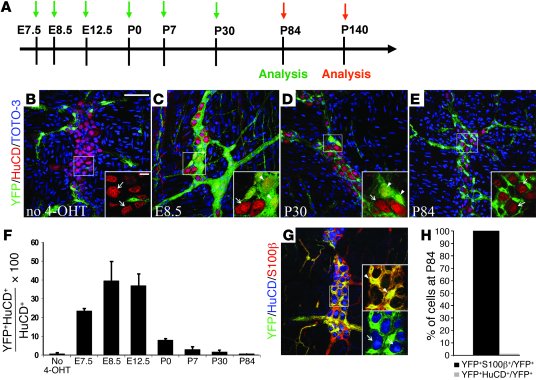 () 4-OHT (0.2 mg/g) was administered to pregnant females or postnatal animals, and the gut of SER26 transgenic mice was analyzed at P84 (for injections at E7.5, E8.5, E12.5, P0, P7, and P30) or P140 (for injections at P84). (–) Laser confocal microscopy images of representative whole mount MS-MP preparations from SER26 animals immunostained for YFP (green) and HuC/D (red) and counterstained with TOTO-3 (blue nuclear marker). MS-MP preparations were from P84 (–) or P140 () mice that were either not treated () or treated with 4-OHT at the indicated time points (–). Arrowheads indicate double-positive (YFP+HuC/D+) cells, which correspond to neurons generated after 4-OHT administration. Arrows indicate YFP–HuC/D+ cells. () Quantification of the fraction of HuC/D+ neurons coexpressing YFP in the gut of P84 or P140 animals. Shown on the axis are the time points of 4-OHT administration. () Laser confocal microscopy images of MS-MP preparations from P140 SER26 animals (tamoxifen administration at P84) immunostained for YFP (green), HuC/D (blue), and S100β (red). Insets are magnification of the boxed area showing YFP+HuC/D–S100β+ cells (arrowheads). Arrows indicate YFP–HuC/D+ neurons. () Quantification of the fraction of HuC/D+ and S100β+ cells within the YFP+ cell population. Error bars indicate sem. Scale bars: 60 μm (– and ) and 10 μm (insets of – and ).