It is unclear whether neurogenesis occurs in the adult mammalian enteric nervous system (ENS). Neural crest–derived cells capable of forming multilineage colonies in culture, and neurons and glia upon transplantation into chick embryos, persist throughout adult life in the mammalian ENS. In this study we sought to determine the physiological function of these cells. We discovered that these cells could be identified based on CD49b expression and that they had characteristics of enteric glia, including p75, GFAP, S100B, and SOX10 expression. To test whether new neurons or glia arise in the adult gut under physiological conditions, we marked dividing progenitors with a thymidine analog in rodents under steady-state conditions, or during aging, pregnancy, dietary changes, hyperglycemia, or exercise. We also tested gut injuries including inflammation, irradiation, benzalkonium chloride treatment, partial gut stenosis, and glial ablation. We readily observed neurogenesis in a neurogenic region of the central nervous system, but not reproducibly in the adult ENS. Lineage tracing of glial cells with GFAP-Cre and GFAP-CreERT2 also detected little or no adult ENS neurogenesis. Neurogenesis in the adult gut is therefore very limited under the conditions we studied. In contrast, ENS gliogenesis was readily observed under steady-state conditions and after injury. Adult enteric glia thus have the potential to form neurons and glia in culture but are fated to form mainly glia under physiological conditions and after the injuries we studied. 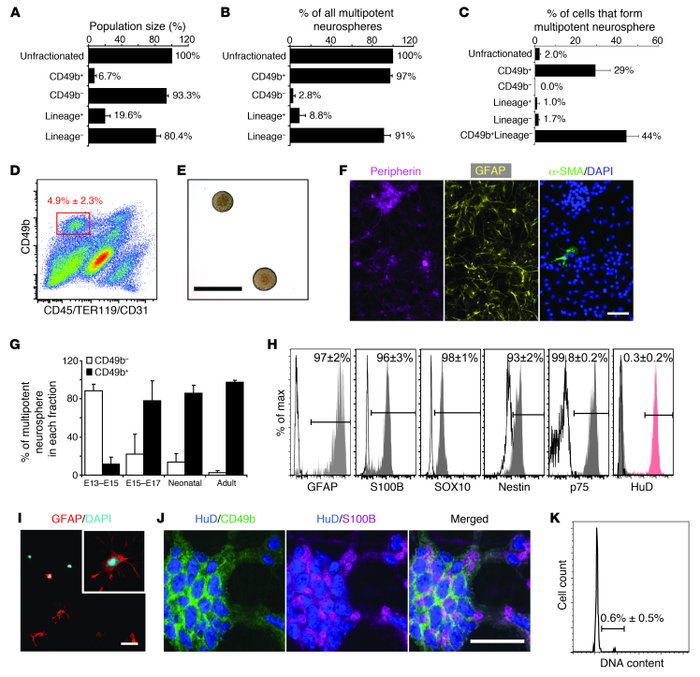 () The frequencies of dissociated adult mouse gut cells from the myenteric plexus/muscle layers that stained with antibodies against CD49b or lineage markers (CD45/TER119/CD31). () The percentage of all cells that formed multipotent neurospheres that were contained in each sorted cell fraction. () The percentage of cells in each sorted fraction that formed multipotent neurospheres in culture. () Flow cytometry plot of dissociated adult mouse gut cells stained with antibodies against CD49b and lineage markers. CD49b+Lin– cells represented 4.9% ± 2.3% of all unfractionated cells. () Primary neurospheres derived from CD49b+Lin– cells. () These neurospheres generated neurons (peripherin+), glia (GFAP+), and myofibroblasts (α-SMA+). () The percentage of all multipotent neurospheres that were formed by CD49b+ or CD49b– cells in the fetal, neonatal, and adult mouse guts. () Flow-cytometric analysis of fixed CD49b+Lin– cells showing that these cells (gray histograms) were nearly uniformly positive for GFAP, S100B, SOX10, nestin, and p75 (unshaded histograms are isotype control staining), but not for the neuronal marker HuD (red shaded histogram represents HuD staining of peripherin+ enteric neurons). () GFAP staining of freshly isolated CD49b+Lin– cells. () CD49b and S100B staining colocalized throughout adult myenteric ganglia, surrounding HuD+ neurons, in a pattern consistent with enteric glia. () DNA content of CD49b+Lin– cells showing few cells in S/G2/M phases of the cell cycle. Scale bars: 400 μm in ; 50 μm in , , and . All data represent mean ± SD from 3–5 independent experiments.