The fatal adult motor neuron disease amyotrophic lateral sclerosis (ALS) shares some clinical and pathological overlap with frontotemporal dementia (FTD), an early-onset neurodegenerative disorder. The RNA/DNA-binding proteins fused in sarcoma (FUS; also known as TLS) and TAR DNA binding protein-43 (TDP-43) have recently been shown to be genetically and pathologically associated with familial forms of ALS and FTD. It is currently unknown whether perturbation of these proteins results in disease through mechanisms that are independent of normal protein function or via the pathophysiological disruption of molecular processes in which they are both critical. Here, we report that Drosophila mutants in which the homolog of FUS is disrupted exhibit decreased adult viability, diminished locomotor speed, and reduced life span compared with controls. These phenotypes were fully rescued by wild-type human FUS, but not ALS-associated mutant FUS proteins. A mutant of the Drosophila homolog of TDP-43 had similar, but more severe, deficits. Through cross-rescue analysis, we demonstrated that FUS acted together with and downstream of TDP-43 in a common genetic pathway in neurons. Furthermore, we found that these proteins associated with each other in an RNA-dependent complex. Our results establish that FUS and TDP-43 function together in vivo and suggest that molecular pathways requiring the combined activities of both of these proteins may be disrupted in ALS and FTD.

Characterization of Cabeza, the homolog of human FUS/TLS. 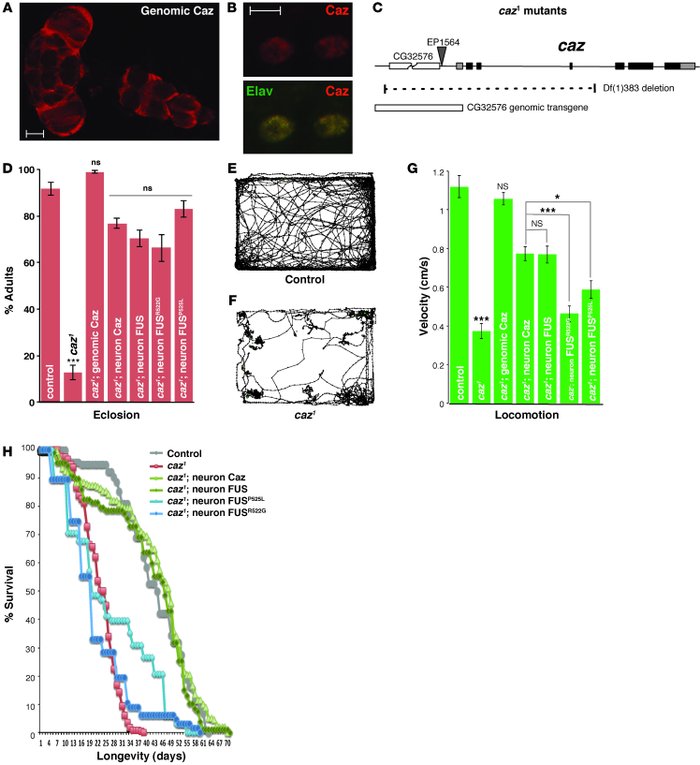