Individuals with type 2 diabetes are at increased risk of acquiring melioidosis, a disease caused by Burkholderia pseudomallei infection. Although up to half of melioidosis patients have underlying diabetes, the mechanisms involved in this increased susceptibility are unknown. We found that B. pseudomallei–infected PBMCs from diabetic patients were impaired in IL-12p70 production, which resulted in decreased IFN-γ induction and poor bacterial killing. The defect was specific to the IL-12–IFN-γ axis. Defective IL-12 production was also observed during Mycobacterium tuberculosis infection, in which diabetes is likewise known to be a strong risk factor. In contrast, IL-12 production in diabetic cells was not affected upon Salmonella enterica infection or in response to TLR2, -3, -4, and -5 ligands. Poor IL-12 production correlated with a deficiency in intracellular reduced glutathione (GSH) concentrations in diabetic patients. Addition of GSH or N-acetylcysteine to PBMCs selectively restored IL-12 and IFN-γ production and improved bacterial killing. Furthermore, the depletion of GSH in mice led to increased susceptibility to melioidosis, reduced production of IL-12p70, and poorer disease outcome. Our data thus establish a link between GSH deficiency in diabetes and increased susceptibility to melioidosis that may open up new therapeutic avenues to protect diabetic patients against some intracellular bacterial pathogens. 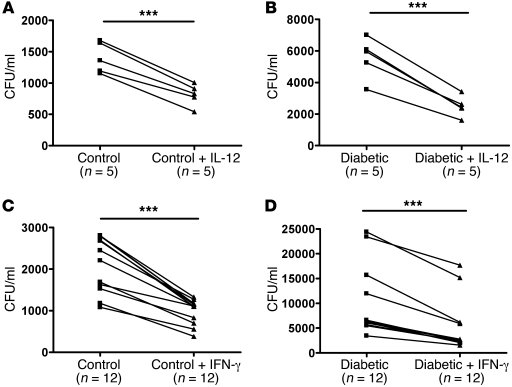 Intracellular bacterial loads were determined as described above. PBMCs from either the ( and ) healthy or ( and ) diabetic individuals were pretreated with recombinant ( and ) IL-12 (100 ng/ml) or ( and ) IFN-γ (100 ng/ml) 2 hours prior to infection with , and the number of intracellular bacteria were determined as described above. Each symbol represents data from 1 study subject. Values obtained from the same study subject before and after cytokine treatment are joined by a line. *** < 0.001.