Expression profile of the anaphylatoxin C5a and the TCC in mice with pneumococcal meningitis. 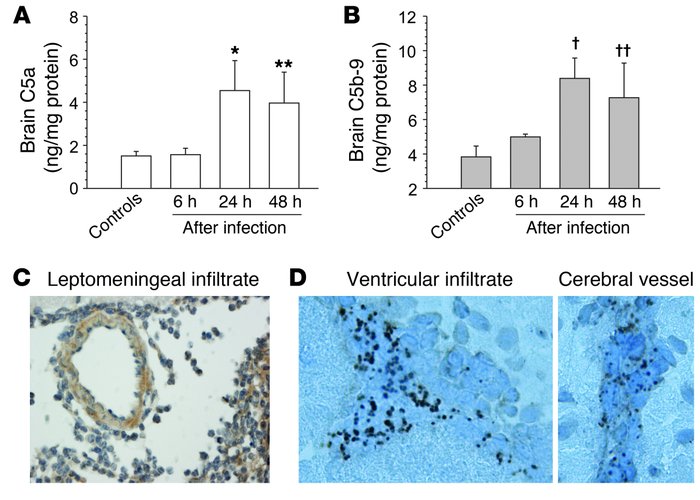 () Levels of C5a (ng/mg) and () TCC (ng/mg) were determined by ELISA in brain homogenates of WT mice intracisternally injected with PBS (controls, = 4) or infected with at different time points after infection (6, 24, and 48 hours; = 5 each) (above). Levels of C5a and TCC were both found to be increased at 24 hours (* = 0.006 and † = 0.002) and 48 hours (** = 0.014 and †† = 0.016) after infection (unpaired Student’s test and Bonferroni correction for multiple measurements; data are shown as mean ± SD). ( and ) Formalin-fixed and paraffin-embedded brains of WT mice infected for 24 hours were used for immunohistochemistry. C5a and TCC immunoreactivity was visualized with streptavidin horseradish peroxidase and DAB, which yields a brown reaction product. In infected mice, positive immunostaining was seen in the inflammatory infiltrates for both C5a (original magnification, ×400 []) and TCC (original magnification, ×1,000 []).