Tregs not only keep immune responses to autoantigens in check, but also restrain those directed toward pathogens and the commensal microbiota. Control of peripheral immune homeostasis by Tregs relies on their capacity to accumulate at inflamed sites and appropriately adapt to their local environment. To date, the factors involved in the control of these aspects of Treg physiology remain poorly understood. Here, we show that the canonical Th2 transcription factor GATA3 is selectively expressed in Tregs residing in barrier sites including the gastrointestinal tract and the skin. GATA3 expression in both murine and human Tregs was induced upon TCR and IL-2 stimulation. Although GATA3 was not required to sustain Treg homeostasis and function at steady state, GATA3 played a cardinal role in Treg physiology during inflammation. Indeed, the intrinsic expression of GATA3 by Tregs was required for their ability to accumulate at inflamed sites and to maintain high levels of Foxp3 expression in various polarized or inflammatory settings. Furthermore, our data indicate that GATA3 limits Treg polarization toward an effector T cell phenotype and acquisition of effector cytokines in inflamed tissues. Overall, our work reveals what we believe to be a new facet in the complex role of GATA3 in T cells and highlights what may be a fundamental role in controlling Treg physiology during inflammation. 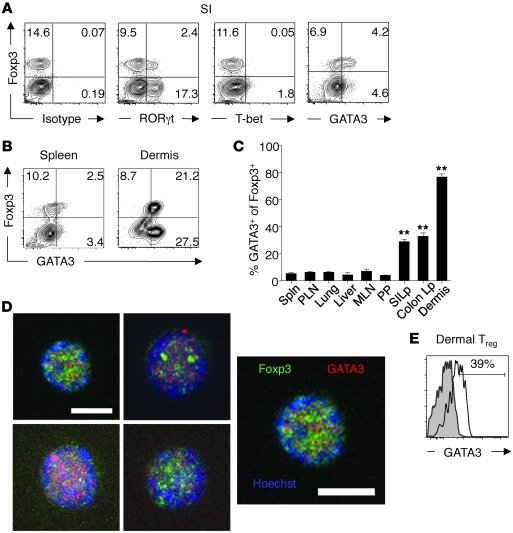