Hypokalemic periodic paralysis (HypoPP) is an ion channelopathy of skeletal muscle characterized by attacks of muscle weakness associated with low serum K+. HypoPP results from a transient failure of muscle fiber excitability. Mutations in the genes encoding a calcium channel (CaV1.1) and a sodium channel (NaV1.4) have been identified in HypoPP families. Mutations of NaV1.4 give rise to a heterogeneous group of muscle disorders, with gain-of-function defects causing myotonia or hyperkalemic periodic paralysis. To address the question of specificity for the allele encoding the NaV1.4-R669H variant as a cause of HypoPP and to produce a model system in which to characterize functional defects of the mutant channel and susceptibility to paralysis, we generated knockin mice carrying the ortholog of the gene encoding the NaV1.4-R669H variant (referred to herein as R669H mice). Homozygous R669H mice had a robust HypoPP phenotype, with transient loss of muscle excitability and weakness in low-K+ challenge, insensitivity to high-K+ challenge, dominant inheritance, and absence of myotonia. Recovery was sensitive to the Na+/K+-ATPase pump inhibitor ouabain. Affected fibers had an anomalous inward current at hyperpolarized potentials, consistent with the proposal that a leaky gating pore in R669H channels triggers attacks, whereas a reduction in the amplitude of action potentials implies additional loss-of-function changes for the mutant NaV1.4 channels.

Construction and genetic analysis of the NaV1.4-R669H knockin mouse. 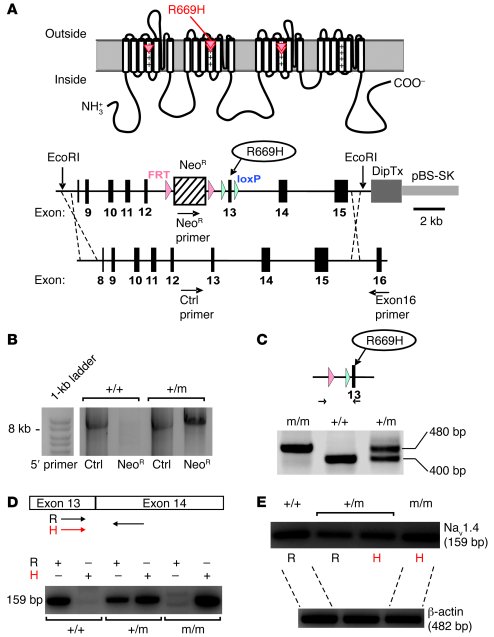 () Schematic diagram of NaV1.4 showing the locations of the HypoPP mutations at arginines in S4 voltage sensor domains (red triangles). The targeting construct (22.4 kb) for homologous recombination in mouse is shown below (see Methods for details). () PCR amplification of an 8.5-kb fragment from splenic DNA isolated from F1 mice showed integration upstream of exon 16 in . The reverse primer was in exon 16, downstream from the targeting construct, as shown in . The NeoR and exon 16 primer pair specifically amplified the R669H+/m allele containing the Neo cassette, but not the WT allele. () PCR analysis of genomic DNA, after crossing with a line expressing Flp recombinase, showed the removal of the Neo cassette with retention of 1 site and 1 site upstream of exon 13 (480 bp, compared with 400 bp for WT). The PCR products also demonstrated a homozygous mutant lacking the 400-bp amplimer (R669Hm/m). () RT-PCR from muscle total RNA using 40 cycles of amplification showed the specificity of forward primers to amplify only the WT allele R or the mutant allele H. () Expression levels of WT and mutant alleles were ascertained by RT-PCR for 24 cycles with allele-specific primers, with normalization to expression of the β-actin transcript. Expression of the mutant allele in R669Hm/m mice was comparable to that of the WT allele in WT mice, and each allele was present at approximately 70% of total control for R669H+/m mice.