In vitro differentiation of human macrophages with enhanced antimycobacterial activity

In vitro differentiation of human macrophages with enhanced antimycobacterial activity

Mycobacterium tuberculosis causes widespread, persistent infection, often residing in macrophages that neither sterilize the bacilli nor allow them to cause disease. How macrophages restrict growth of pathogens is one of many aspects of human phagocyte biology whose study relies largely on macrophages differentiated from monocytes in vitro. However, such cells fail to recapitulate the phenotype of tissue macrophages in key respects, including that they support early, extensive replication of M. tuberculosis and die in several days. Here we found that human macrophages could survive infection, kill Mycobacterium bovis BCG, and severely limit the replication of M. tuberculosis for several weeks if differentiated in 40% human plasma under 5%–10% (physiologic) oxygen in the presence of GM-CSF and/or TNF-α followed by IFN-γ. Control was lost with fetal bovine serum, 20% oxygen, M-CSF, higher concentrations of cytokines, or premature exposure to IFN-γ. We believe that the new culture method will enable inquiries into the antimicrobial mechanisms of human macrophages. 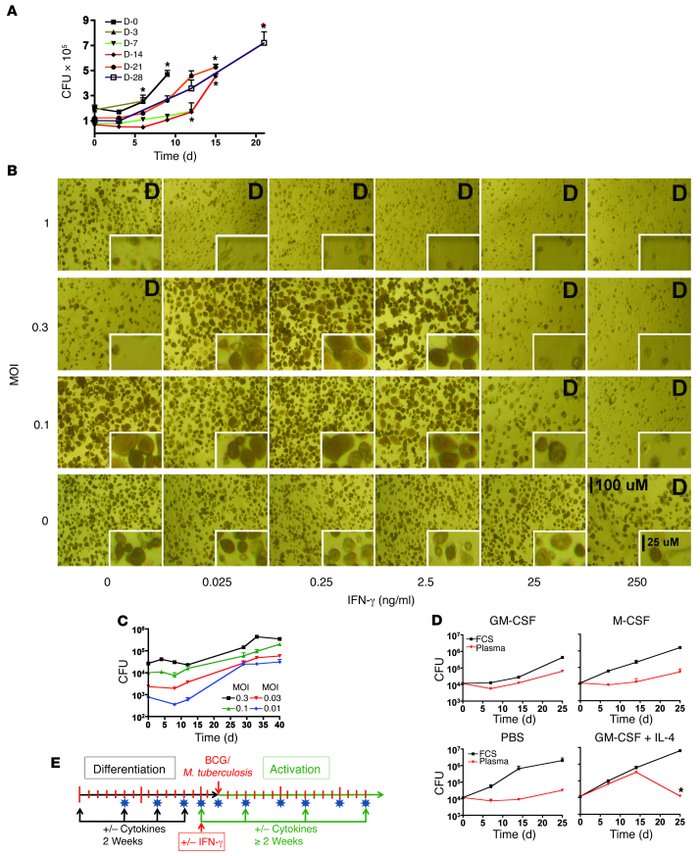 Effect of differentiation time, cytokines, and MOI. () Differentiation time. Cells were incubated in RPMI–40% human plasma for periods ranging from 0 to 28 days (D-0 to D-28) before infection with BCG (MOI of 0.3). Cells were lysed on the days following infection (indicated on the axis.) and CFU determined. Asterisks denote host cell destruction. () Effects of IFN-γ during the activation period. MDMs differentiated for 14 days as in were exposed to indicated concentrations of IFN-γ on day 14 and infected with BCG at the indicated MOI on day 16. Photomicrographs were recorded 21 days after infection in 1 experiment representative of 3, each with different donors. Scale bars: 100 μm; 25 μm, insets. () Effect of MOI on CFU. MDMs were differentiated and infected as in . Cells were lysed for determination of CFU as in . () Effect of cytokines during the differentiation period. MDMs were differentiated and infected as in , except that where indicated they were exposed to GM-CSF, M-CSF, or GM-CSF plus IL-4 (50 ng/ml each) before infection (MOI of 0.1). Cells were lysed for determination of CFU as in . Results were similar for 3 donors in and 2 in and . The asterisks in “D” refer to cell destruction. () Schematic of cell culture. Monocytes were differentiated for 14 days with or without exogenous cytokines under various tensions of O2, activated beginning on day 14, infected on day 16, and lysed 2–8 weeks later for CFU. Blue stars denote changes of 30% of the medium.