Liddle's syndrome is an inherited form of hypertension linked to mutations in the epithelial Na+ channel (ENaC). ENaC is composed of three subunits (α, β, γ), each containing a COOH-terminal PY motif (xPPxY). Mutations causing Liddle's syndrome alter or delete the PY motifs of β- or γ-ENaC. We recently demonstrated that the ubiquitin–protein ligase Nedd4 binds these PY motifs and that ENaC is regulated by ubiquitination. Here, we investigate, using the Xenopus oocyte system, whether Nedd4 affects ENaC function. Overexpression of wild-type Nedd4, together with ENaC, inhibited channel activity, whereas a catalytically inactive Nedd4 stimulated it, likely by acting as a competitive antagonist to endogenous Nedd4. These effects were dependant on the PY motifs, because no Nedd4-mediated changes in channel activity were observed in ENaC lacking them. The effect of Nedd4 on ENaC missing only one PY motif (of β-ENaC), as originally described in patients with Liddle's syndrome, was intermediate. Changes were due entirely to alterations in ENaC numbers at the plasma membrane, as determined by surface binding and immunofluorescence. Our results demonstrate that Nedd4 is a negative regulator of ENaC and suggest that the loss of Nedd4 binding sites in ENaC observed in Liddle's syndrome may explain the increase in channel number at the cell surface, increased Na+ reabsorption by the distal nephron, and hence the hypertension. 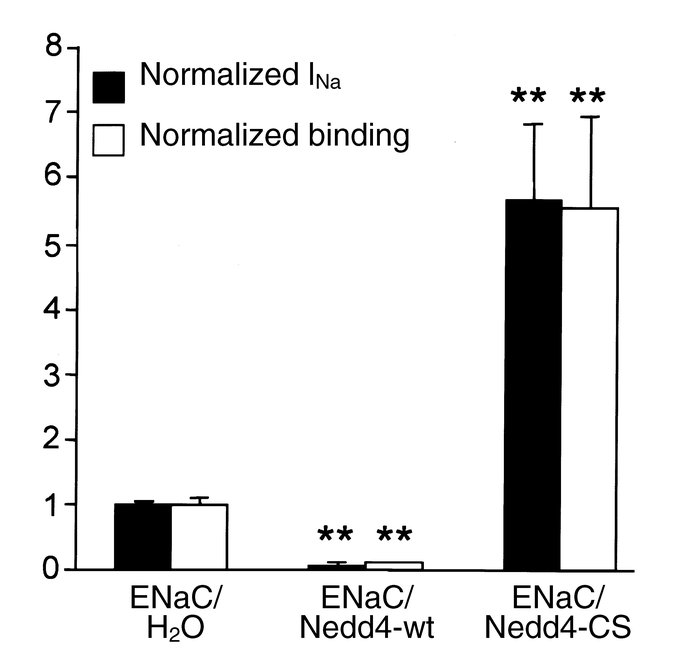 Nedd4 regulates the number of ENaC channels at the cell surface. Oocytes were coinjected with ENaCF and either H2O (), 25 ng xNedd4-wt cRNA (), or xNedd4C938S (Nedd4-CS; ). To quantitate the number of channels a t the cell surface, INa () and binding of iodinated anti-FLAG antibodies () were measured in the same oocytes, as described previously (). Current and binding values were normalized to control values (5.5 ± 1.2 μA/oocyte and 0.10 ± 0.01 fmol/oocyte, respectively). ** 0.01 vs. ENaCF/H2O–injected oocytes.