Congenital afibrinogenemia is a rare autosomal recessive disorder characterized by the complete absence of detectable fibrinogen. Uncontrolled bleeding after birth from the umbilical cord is common, and spontaneous intracerebral bleeding and splenic rupture can occur throughout life. Patients respond well to fibrinogen replacement therapy, either prophylactically or on demand. Because the half-life of infused fibrinogen is essentially normal, the genetic defect is assumed to be at the level of synthesis, but no responsible locus has been identified. Preliminary studies using Southern blotting suggested that no gross structural changes of the fibrinogen genes were present in patients. We report the identification of causative mutations in a nonconsanguineous Swiss family with congenital afibrinogenemia. The four affected male individuals (two brothers and their two first cousins) have homozygous deletions of ∼11 kb of the fibrinogen alpha-chain gene (FGA). Haplotype data suggest that these deletions occurred separately, on three distinct ancestral chromosomes, implying that the FGA region of the fibrinogen locus is susceptible to deletion by a common mechanism. Furthermore, our results demonstrate that humans, like mice, may be born without the capacity to synthesize functional fibrinogen. 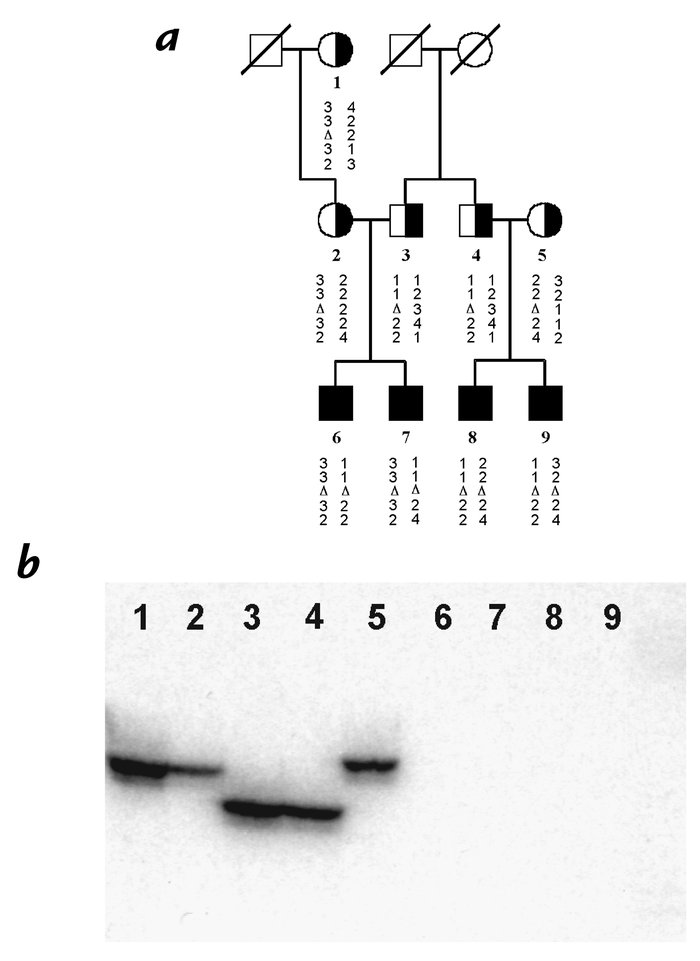 () Pedigree of the Swiss congenital afibrinogenemia family and haplotypes of the region surrounding the fibrinogen locus. The markers (from to ) and genetic distances were: – (13%) – – (2%) – – (2%) – – (2%) – . The deletion (shown as Δ) is associated with three different haplotypes. () PAGE analysis of the tetranucleotide repeat marker , which is homozygously deleted in individuals . , fibrinogen alpha-chain gene.