We have shown previously that a group IIA phospholipase A2 (PLA2) is responsible for the potent bactericidal activity of inflammatory fluids against many Gram-positive bacteria. To exert its antibacterial activity, this PLA2 must first bind and traverse the bacterial cell wall to produce the extensive degradation of membrane phospholipids (PL) required for bacterial killing. In this study, we have examined the properties of the cell-wall that may determine the potency of group IIA PLA2 action. Inhibition of bacterial growth by nutrient deprivation or a bacteriostatic antibiotic reversibly increased bacterial resistance to PLA2-triggered PL degradation and killing. Conversely, pretreatment of Staphylococcus aureus or Enterococcus faecium with subinhibitory doses of β-lactam antibiotics increased the rate and extent of PL degradation and/or bacterial killing after addition of PLA2. Isogenic wild-type (lyt+) and autolysis-deficient (lyt–) strains of S. aureus were equally sensitive to the phospholipolytic action of PLA2, but killing and lysis was much greater in the lyt+ strain. Thus, changes in cell-wall cross-linking and/or autolytic activity can modulate PLA2 action either by affecting enzyme access to membrane PL or by the coupling of massive PL degradation to autolysin-dependent killing and bacterial lysis or both. Taken together, these findings suggest that the bacterial envelope sites engaged in cell growth may represent preferential sites for the action and cytotoxic consequences of group IIA PLA2 attack against Gram-positive bacteria. 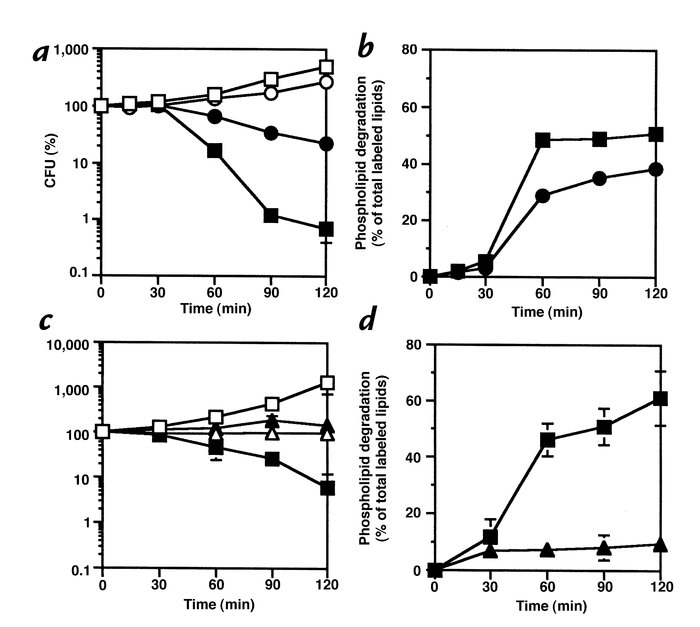