Estrogen is an important vasoprotective molecule that causes the rapid dilation of blood vessels by activating endothelial nitric oxide synthase (eNOS) through an unknown mechanism. In studies of intact ovine endothelial cells, 17β-estradiol (E2) caused acute (five-minute) activation of eNOS that was unaffected by actinomycin D but was fully inhibited by concomitant acute treatment with specific estrogen receptor (ER) antagonists. Overexpression of the known transcription factor ERα led to marked enhancement of the acute response to E2, and this was blocked by ER antagonists, was specific to E2, and required the ERα hormone-binding domain. In addition, the acute response of eNOS to E2 was reconstituted in COS-7 cells cotransfected with wild-type ERα and eNOS, but not by transfection with eNOS alone. Furthermore, the inhibition of tyrosine kinases or mitogen-activated protein (MAP) kinase kinase prevented the activation of eNOS by E2, and E2 caused rapid ER-dependent activation of MAP kinase. These findings demonstrate that the short-term effects of estrogen central to cardiovascular physiology are mediated by ERα functioning in a novel, nongenomic manner to activate eNOS via MAP kinase–dependent mechanisms. 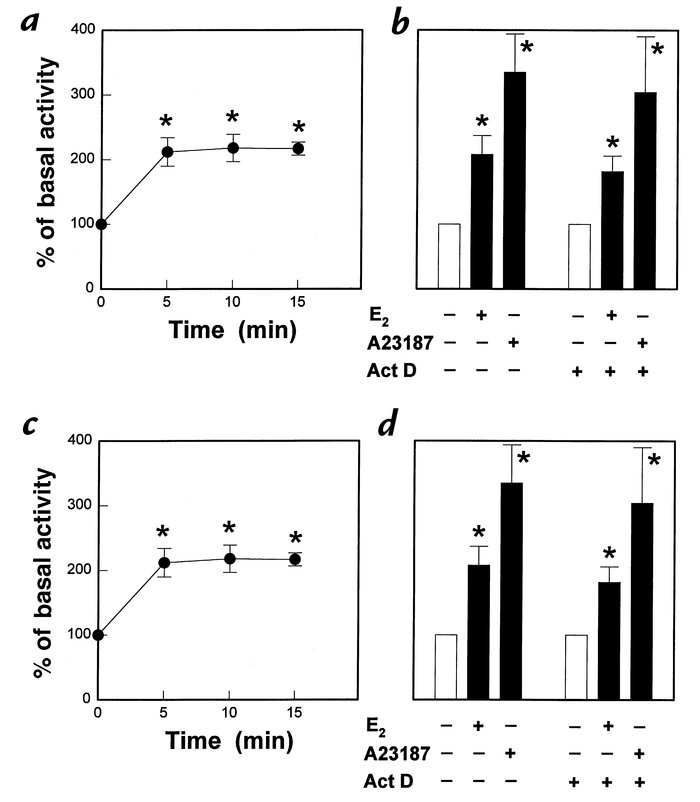