The adapter protein SLP-76 is expressed in T lymphocytes and hematopoietic cells of the myeloid lineage, and is known to be a substrate of the protein tyrosine kinases that are activated after ligation of the T-cell antigen receptor. Transient overexpression of SLP-76 in a T-cell line potentiates transcriptional activation after T-cell receptor ligation, while loss of SLP-76 expression abrogates several T-cell receptor–dependent signaling pathways. Mutant mice that lack SLP-76 manifest a severe block at an early stage of thymocyte development, implicating SLP-76 in signaling events that promote thymocyte maturation. While it is clear that SLP-76 plays a key role in development and activation of T lymphocytes, relatively little is understood regarding its role in transducing signals initiated after receptor ligation in other hematopoietic cell types. In this report, we describe fetal hemorrhage and perinatal mortality in SLP-76–deficient mice. Although megakaryocyte and platelet development proceeds normally in the absence of SLP-76, collagen-induced platelet aggregation and granule release is markedly impaired. Furthermore, treatment of SLP-76–deficient platelets with collagen fails to elicit tyrosine phosphorylation of phospholipase C-γ2 (PLC-γ2), suggesting that SLP-76 functions upstream of PLC-γ2 activation. These data provide one potential mechanism for the fetal hemorrhage observed in SLP-76–deficient mice and reveal that SLP-76 expression is required for optimal receptor-mediated signal transduction in platelets as well as T lymphocytes. 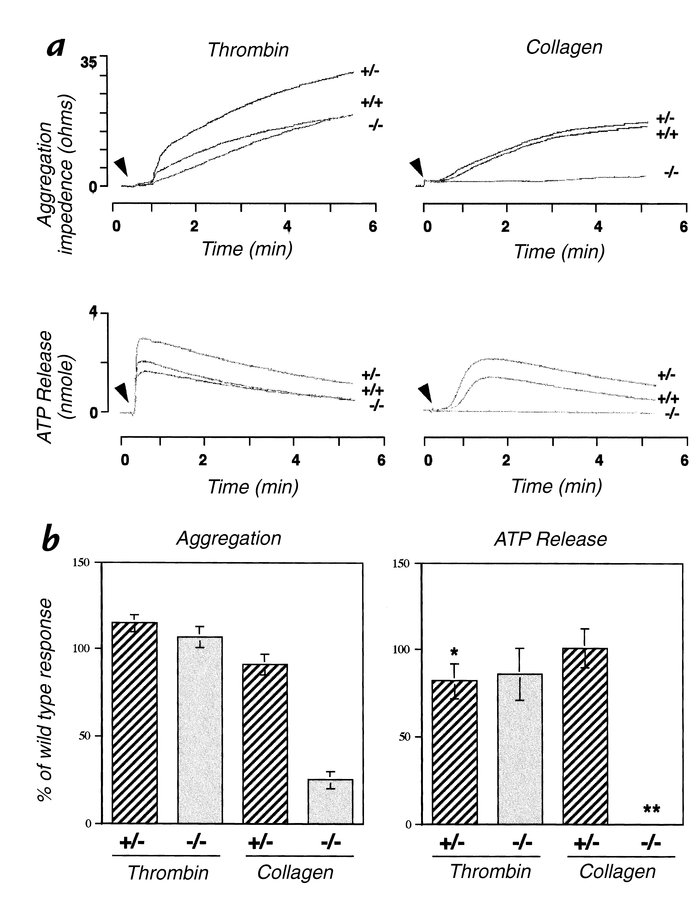 Platelet aggregation and ATP release in response to thrombin or collagen. Whole blood was isolated from SLP-76 +/+, +/–, or –/– mice, and platelet number was normalized before analysis. () Aggregation and ATP release tracings from one representative experiment. Arrowheads indicate the point at which the indicated agonist was added. () Change in impedence () or ATP concentration () was determined for each sample at the same time point after addition of thrombin or collagen by measuring the amplitude of the response. The timepoint at which the response was measured correlated with the maximal response. The values obtained for the +/– and –/– samples were normalized by calculating the percent of the +/+ response. The SEM for each group is shown. These data were obtained from four independent experiments. In all other cases, data was obtained from five independent experiments. In all experiments, ATP release from SLP-76–/– platelets after exposure to collagen was not detectable.