Angiotensin II type 2 (AT2) receptor is abundantly expressed in vascular smooth muscle cells (VSMC) of the fetal vasculature during late gestation (embryonic day 15–20), during which the blood vessels undergo remodeling. To examine directly the influence of AT2 receptor expression in the developmental biology of VSMC, we studied cultures of VSMC from fetal and postnatal wild-type (Agtr2+) and AT2 receptor null (Agtr2–) mice. Consistent with in vivo data, AT2 receptor binding in cultured Agtr2+ VSMC increased by age, peaking at embryonic day 20, and decreased dramatically after birth. Angiotensin II–induced growth in Agtr2+ VSMC (embryonic day 20) was increased by the AT2 receptor blocker PD123319, indicating that the AT2 receptors are functional and exert an antigrowth effect in Agtr2+ VSMC. Growth of VSMC in response to serum decreased age dependently and was higher in Agtr2– than in Agtr2+, inversely correlating with AT2 receptor expression. However, serum-induced growth in Agtr2+ and Agtr2– VSMC and the exaggerated Agtr2– VSMC growth was maintained even in the presence of PD123319 or losartan, an AT1 receptor blocker. Moreover, Agtr2– VSMC showed greater growth responses to platelet-derived growth factor and basic fibroblast growth factor, indicating that Agtr2– cells exhibit a generalized exaggerated growth phenotype. We studied the mechanism responsible for this phenotype and observed that extracellular signal-regulated kinase (ERK) activity was higher in Agtr2– VSMC at baseline and also in response to serum. ERK kinase inhibitor PD98059 inhibited both growth and ERK phosphorylation dose–dependently, while the regression lines between growth and ERK phosphorylation were identical in Agtr2+ and Agtr2– VSMC, suggesting that increased ERK activity in Agtr2– VSMC is pivotal in the growth enhancement. Furthermore, the difference in ERK phosphorylation between Agtr2+ and Agtr2– was abolished by vanadate but not by okadaic acid, implicating tyrosine phosphatase in the difference in ERK activity. These results suggest that the AT2 receptor expression during the fetal vasculogenesis influences the growth phenotype of VSMC via the modulation of ERK cascade. 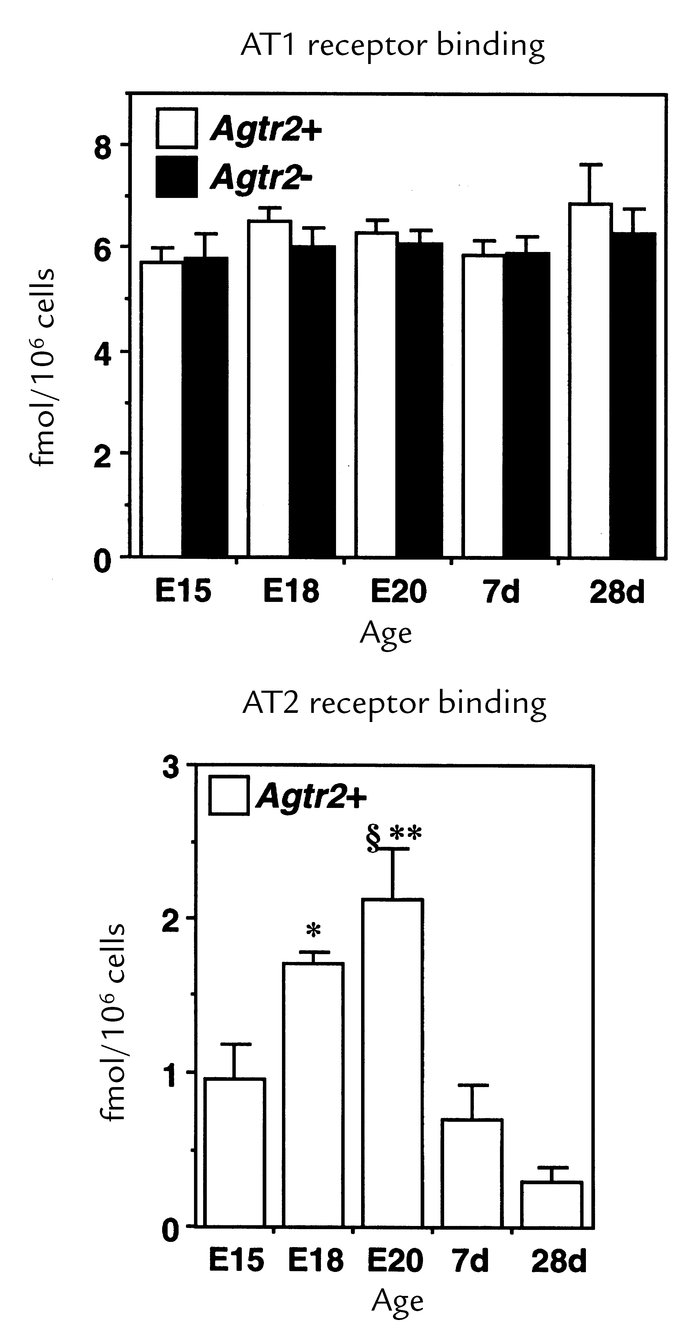