The role of the plasminogen activation system (PAS) was investigated during the course of infection of a relapsing fever Borrelia species in plasminogen-deficient (plg –/–) and control (plg+/+ and plg+/–) mice. Subcutaneous inoculation of 104 spirochetes resulted in a peak spirochetemia five days after infection with 20–23 × 106 organisms per milliliter of whole blood in all mice, indicating that the PAS had no effect on the development of this phase of the infection. Anemia, thrombocytopenia, hepatitis, carditis, and splenomegaly were noted in all mice during and immediately after peak spirochetemia. Fibrin deposition in organs was noted in plg–/– mice but not in controls during these stages. Significantly greater spirochetal DNA burdens were consistently observed in the hearts and brains of control mice 28–30 days after infection, as determined by PCR amplification of this organism's flagellin gene (flaB), followed by quantitative densitometry. Furthermore, the decreased spirochetal load in brains of plg –/– mice was associated with a significant decrease in the degree of inflammation of the leptomeninges in these mice. These findings indicate a role for the PAS in heart and brain invasion by relapsing fever Borrelia, resulting in organ injury. 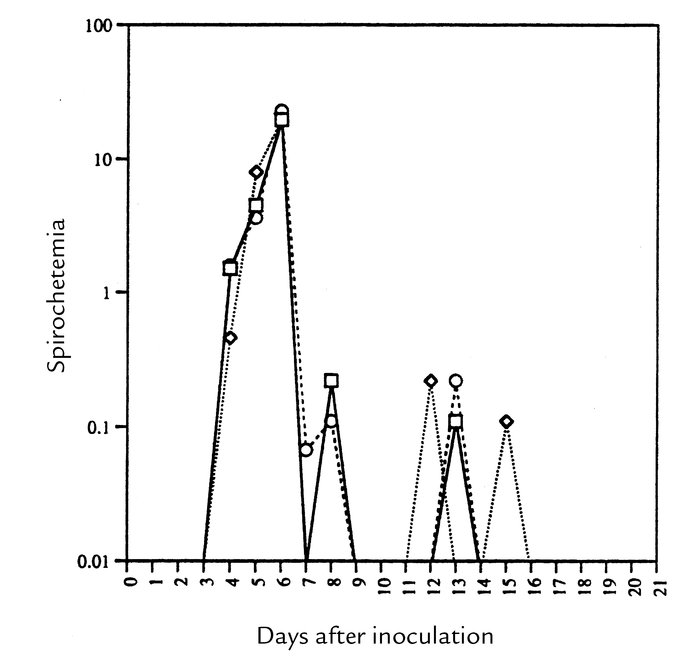