We investigated the mechanisms responsible for altered contractile and relaxation function in overexpressed Gsα myocytes. Although baseline contractile function (percent contraction) in Gsα mice was similar to that of wild-type (WT) mice, left ventricular myocyte contraction, fura-2 Ca2+transients, and Ca2+ channel currents (ICa) were greater in Gsα mice in response to 10–8 M isoproterenol (ISO) compared with WT mice. The late phase of relaxation of the isolated myocytes and fura-2 Ca2+ transients was accelerated at baseline in Gsα but did not increase further with ISO. In vivo measurements using echocardiography also demonstrated enhanced relaxation at baseline in Gsα mice. Forskolin and CaCl2 increased contraction similarly in WT and Gsα mice. Rp-cAMP, an inhibitor of protein kinase, blocked the increases in contractile response and Ca2+ currents to ISO in WT and to forskolin in both WT and Gsα. It also blocked the accelerated relaxation in Gsα at baseline but not the contractile response to ISO in Gsα myocytes. Baseline measurements of cAMP and phospholambation phosphorylation were enhanced in Gsα compared with WT. These data indicate that overexpression of Gsα accelerates relaxation at end diastolic but does not affect baseline systolic function in isolated myocytes. However, the enhanced responses to sympathetic stimulation partly reflect increased Ca2+ channel activity; i.e the cellular mechanisms mediating these effects appear to involve a cAMP-independent as well as a cAMP-dependent pathway. 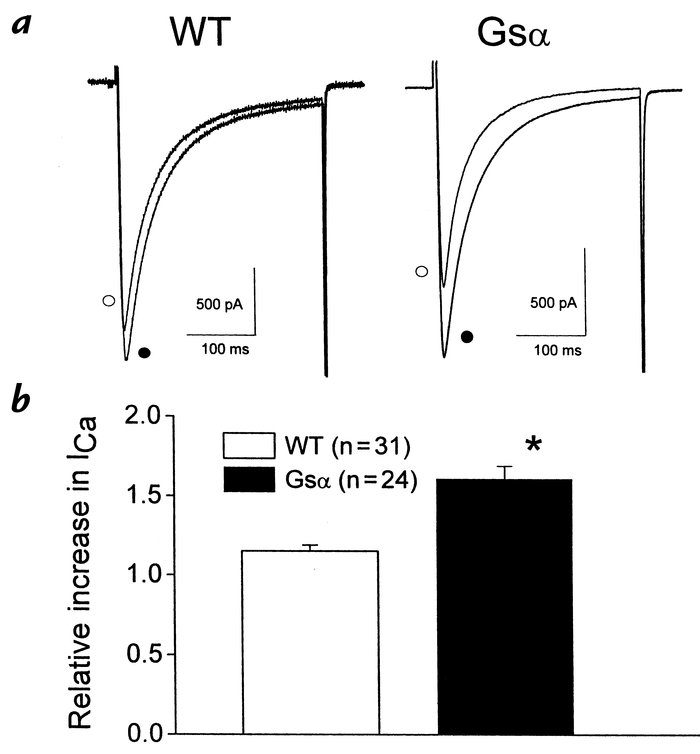 Change to ICa response in the presence of Rp-cAMP. () Current traces were recorded in WT and Gsα myocytes from a holding potential of –50 mV to 0 mV and were superimposed before () and after ISO (). () Mean increase of ICa elicited by ISO assessed in the presence of Rp-cAMP, ISO, increased ICa in Gsα myocytes, but not in WT. Numbers correspond to number of cells. * 0.001 vs. respective WT.