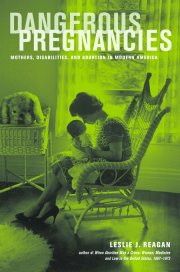 Leslie J. Reagan’s Dangerous Pregnancies tells the fascinating story of how the German measles (rubella) epidemic in the US in the 1960s set the terms of the both the contemporary abortion debate and the modern disability rights movement. An associate professor of history at the University of Illinois at Urbana–Champaign, Reagan explains how rubella, an “inoffensive complaint,” prompted transformation of medical professions, social attitudes, and ultimately the law. The narrative builds on Reagan’s earlier book, When Abortion Was a Crime: Women, Medicine, and Law in the United States, 1867–1973 (University of California Press), and benefits from an interdisciplinary approach that reflects the author’s background in gender and women’s studies, media studies, law and medicine.

Rubella produces a perplexing rash and fever, difficult to distinguish from the more dangerous symptoms of smallpox or scarlet fever. The disease itself was mild for those afflicted, yet, as physicians eventually came to understand, the effect of overlooking or misdiagnosing it in pregnant women could be devastating. Children of mothers exposed to German measles, particularly early in pregnancy, were variously born blind, deaf, cognitively impaired, or with heart problems or other special needs. Physicians struggled under the difficulty of predicting risk, attempting to determine whether children would — or would not — be born healthy. The “epidemic of anxiety” the rubella outbreak produced created a demand for accurate and timely medical information. Frightened women, their husbands, and the public at large struggled with what Newsweek called “the risk of a retarded or malformed child.” Images of “thalidomide babies” from the contemporaneous thalidomide tragedy made all too clear the outcome of fetal development gone awry. In an era when physical handicaps were stigmatized even more than they are now, women who gave birth to “rubella babies” found themselves largely alone, with little or no public resources devoted to caring for or educating their children. Many pregnant women, aware of their exposure to rubella and aware of the risks, asked for options. In seeking to end their (wanted) pregnancies, they sought to avoid bringing such suffering upon an unborn child and the burden such a birth would place on their existing families.

Strictly speaking, of course, in the pre–Roe v. Wade period, US law forbade abortion. In practice, however, many physicians and hospitals understood the law to permit what amounted to “therapeutic abortion” in circumstances that threatened the mother’s life or in which the fetus had suffered severe damage. The decision of whether and to whom to offer therapeutic abortions, however, rested solely in the hands of physicians, rendering the practice subject to the beliefs of the individual physician and, in Reagan’s words, “systematically arbitrary.” Most physicians regarded early maternal exposure to rubella as justifiable grounds — medically and ethically — for abortion. Yet frequently women found their requests for accurate information and self-determination refused. Reagan’s analysis of court records in Stewart v. Long Island College Hospital and several other malpractice suits demonstrates how little power women had. Some doctors downplayed risk and then left women and their families to care for infants assailed with multiple life-long disabilities. Reagan heralds the Stewarts and others who appealed to the courts as pioneers, working to alter the balance of power so that women could gain the right to decide for themselves and their families whether or not to continue a high-risk pregnancy.

The German measles epidemic also drove efforts to protect physicians and hospitals that performed therapeutic abortion. Reagan relates how practitioners who provided abortions on grounds of early-term rubella exposure found themselves prosecuted for “professional misconduct” and violation of the law. The zealous Roman Catholic priest, Father William Kenneally, testifying at a 1962 hearing on the proposed legislative reform, deemed abortion a “betrayal of maternity.” Kenneally went so far as to deploy the trope of “a lynching in the womb,” comparing doctors and the patients to the murderers of Jews and African Americans. Other religious figures, however, including leaders of the Episcopal, Methodist, and Jewish religious communities, came out in support of legal reform. Catholic supporters of abortion reform also emerged, opening up a division within the Church.

The story of how rubella spurred efforts to reform abortion laws in California is compelling in its own right. Even more intriguing is Reagan’s depiction of how battle lines drawn in the early 1960s prefigured the controversy that continues to surround Roe v. Wade. If the strength of her account lies in its historical depth, one might wish in places for less detail and more analysis. How exactly was it, for example, that the push for liberalizing or “reforming” abortion statues emerged side by side with a nascent disability rights movement? But despite this minor shortcoming, Dangerous Pregnancies deserves attention not only for the historical illumination it provides but also for what it reveals about our current understanding of patient rights, medical obligation, and public attitudes toward epidemics and those who suffer their consequences.