Appropriate localization and migration of T cells is a prerequisite for antitumor immune surveillance. Studies using fixed tumor samples from human patients have shown that T cells accumulate more efficiently in the stroma than in tumor islets, but the mechanisms by which this occurs are unknown. By combining immunostaining and real-time imaging in viable slices of human lung tumors, we revealed that the density and the orientation of the stromal extracellular matrix likely play key roles in controlling the migration of T cells. Active T cell motility, dependent on chemokines but not on β1 or β2 integrins, was observed in loose fibronectin and collagen regions, whereas T cells migrated poorly in dense matrix areas. Aligned fibers in perivascular regions and around tumor epithelial cell regions dictated the migratory trajectory of T cells and restricted them from entering tumor islets. Consistently, matrix reduction with collagenase increased the ability of T cells to contact cancer cells. Thus, the stromal extracellular matrix influences antitumor immunity by controlling the positioning and migration of T cells. Understanding the mechanisms by which this collagen network is generated has the potential to aid in the development of new therapeutics. 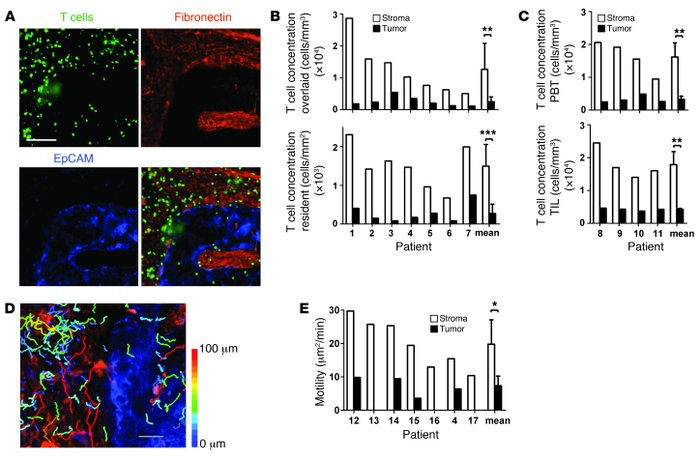 () Preactivated T cells (Hoechst; green) were added to a human lung tumor slice that was subsequently stained for fibronectin and EpCAM to respectively identify stromal (red) and tumor epithelial cell (blue) regions. Each image, captured with a widefield microscope, is the maximum projection of 4 images spanning 60 μm in the direction beneath the cut surface of the slice. () Concentration of in vitro activated T cells and resident CD3+ cells in the stromal and tumor cell regions. () Concentration of in vitro activated PBTs and freshly isolated autologous TILs in the stromal and tumor cell regions. () Trajectories of individual T cells in the stromal (red) and tumor cell (blue) regions. Fluorescently labeled T cells introduced into a human tumor slice were imaged for 20 minutes, after which the slice was stained for fibronectin and EpCAM. Trajectories were superimposed over immunofluorescence images. Tracks are color coded according to extent of cell displacement. See also Supplemental Video 1. () Motility coefficient of T cells in the stromal and tumor cell regions. Values are mean ± SD of data obtained in slices from 7 ( and ) or 4 () different human lung tumors. * < 0.05; ** < 0.01; *** < 0.001. Scale bars: 100 μm (); 50 μm ().