Biochemical studies have suggested conflicting roles for the E3 ubiquitin ligase constitutive photomorphogenesis protein 1 (Cop1; also known as Rfwd2) in tumorigenesis, providing evidence for both the oncoprotein c-Jun and the tumor suppressor p53 as its targets. Here we present what we believe to be the first in vivo investigation of the role of Cop1 in cancer etiology. Using an innovative genetic approach to generate an allelic series of Cop1, we found that Cop1 hypomorphic mice spontaneously developed malignancy at a high frequency in the first year of life and were highly susceptible to radiation-induced lymphomagenesis. Further analysis revealed that c-Jun was a key physiological target for Cop1 and that Cop1 constitutively kept c-Jun at low levels in vivo and thereby modulated c-Jun/AP-1 transcriptional activity. Importantly, Cop1 deficiency stimulated cell proliferation in a c-Jun–dependent manner. Focal deletions of COP1 were observed at significant frequency across several cancer types, and COP1 loss was determined to be one of the mechanisms leading to c-Jun upregulation in human cancer. We therefore conclude that Cop1 is a tumor suppressor that functions, at least in part, by antagonizing c-Jun oncogenic activity. In the absence of evidence for a genetic interaction between Cop1 and p53, our data strongly argue against the use of Cop1-inhibitory drugs for cancer therapy.

The gene trap approach developed for this study allows the generation of an allelic series of . 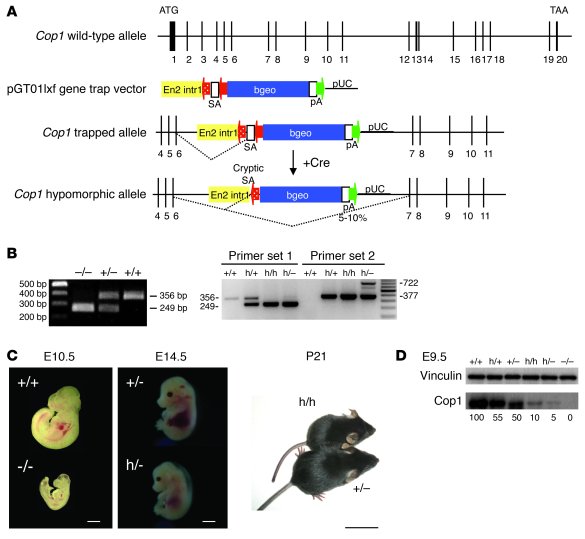 () The structure of the pGT01xf gene trap vector along with the structures of the wild-type, trapped (assimilated to a null allele), and hypomorphic alleles. The hypomorphic allele is generated by Cre-mediated conversion of the trapped allele. Exons are indicated by black boxes. En2 intr1, intron 1 of ; βgeo, /neomycin reporter/selection cassette. () A representative PCR analysis of E9.5 embryos with the indicated genotypes (left panel). The 3 primers used are described in Methods. Discrimination of the wild-type, null, and hypomorphic alleles by PCR using 2 different primer sets (right panel). () Wild-type (+/+ or +/–), homozygous trapped (–/–), and heterozygous embryos harboring one hypomorphic and one trapped allele (h/–) at E10.5 and E14.5, respectively. Control (+/–) mice and mice homozygous for the hypomorphic mutation at P21. Scale bars (left to right): 1 mm, 5 mm, and 3 cm. () Total lysates were prepared from E9.5 embryos with the indicated genotypes. Cop1 and vinculin were detected by Western blotting. The relative amount of Cop1 in the various protein lysates is indicated as percentage relative to the amount in wild-type mice (+/+; 100%).