The ubiquitin-proteasome system degrades most intracellular proteins, including misfolded proteins. Proteasome functional insufficiency (PFI) has been observed in proteinopathies, such as desmin-related cardiomyopathy, and implicated in many common diseases, including dilated cardiomyopathy and ischemic heart disease. However, the pathogenic role of PFI has not been established. Here we created inducible Tg mice with cardiomyocyte-restricted overexpression of proteasome 28 subunit α (CR-PA28αOE) to investigate whether upregulation of the 11S proteasome enhances the proteolytic function of the proteasome in mice and, if so, whether the enhancement can rescue a bona fide proteinopathy and protect against ischemia/reperfusion (I/R) injury. We found that CR-PA28αOE did not alter the homeostasis of normal proteins and cardiac function, but did facilitate the degradation of a surrogate misfolded protein in the heart. By breeding mice with CR-PA28αOE with mice representing a well-established model of desmin-related cardiomyopathy, we demonstrated that CR-PA28αOE markedly reduced aberrant protein aggregation. Cardiac hypertrophy was decreased, and the lifespan of the animals was increased. Furthermore, PA28α knockdown promoted, whereas PA28α overexpression attenuated, accumulation of the mutant protein associated with desmin-related cardiomyopathy in cultured cardiomyocytes. Moreover, CR-PA28αOE limited infarct size and prevented postreperfusion cardiac dysfunction in mice with myocardial I/R injury. We therefore conclude that benign enhancement of cardiac proteasome proteolytic function can be achieved by CR-PA28αOE and that PFI plays a major pathogenic role in cardiac proteinopathy and myocardial I/R injury. 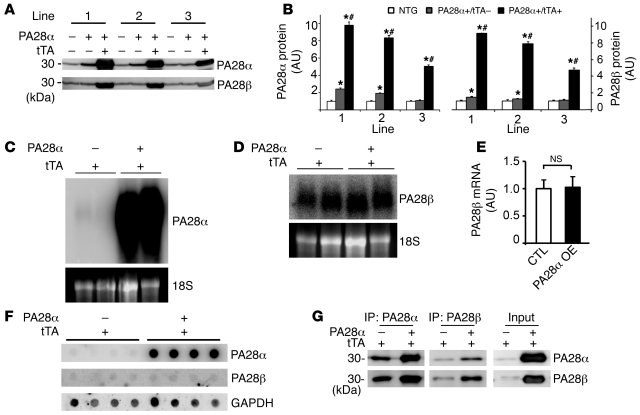