Inclusion body myopathy with Paget disease of bone and frontotemporal dementia (IBMPFD) is an autosomal dominant disorder characterized by progressive myopathy that is often accompanied by bone weakening and/or frontotemporal dementia. Although it is known to be caused by mutations in the gene encoding valosin-containing protein (VCP), the underlying disease mechanism remains elusive. Like IBMPFD, neurofibromatosis type 1 (NF1) is an autosomal dominant disorder. Neurofibromin, the protein encoded by the NF1 gene, has been shown to regulate synaptogenesis. Here, we show that neurofibromin and VCP interact and work together to control the density of dendritic spines. Certain mutations identified in IBMPFD and NF1 patients reduced the interaction between VCP and neurofibromin and impaired spinogenesis. The functions of neurofibromin and VCP in spinogenesis were shown to correlate with the learning disability and dementia phenotypes seen in patients with IBMPFD. Consistent with the previous finding that treatment with a statin rescues behavioral defects in Nf1+/– mice and providing further support for our hypothesis that there is crosstalk between neurofibromin and VCP, statin exposure neutralized the effect of VCP knockdown on spinogenesis in cultured hippocampal neurons. The data presented here demonstrate that there is a link between IBMPFD and NF1 and indicate a role for VCP in synapse formation.

The density of dendritic spines is reduced in heterozygous mice. 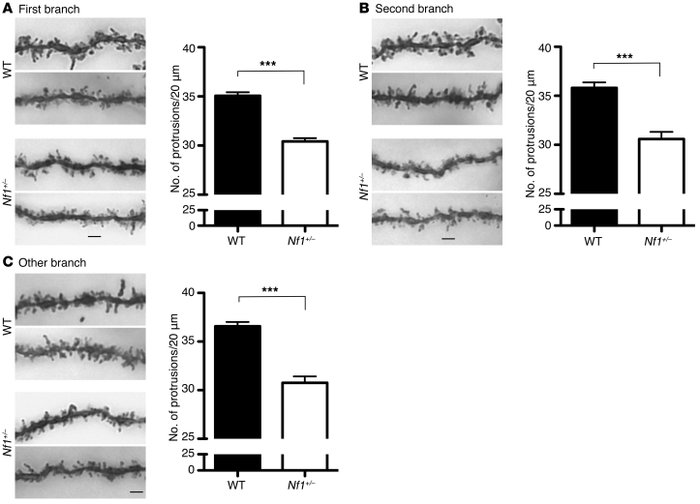