The adenosine triphosphate (ATP)–sensitive K+ (KATP) channel is the most abundant K+ channel active in the skeletal muscle fibers of humans and animals. In the present work, we demonstrate the involvement of the muscular KATP channel in a skeletal muscle disorder known as hypokalemic periodic paralysis (HOPP), which is caused by mutations of the dihydropyridine receptor of the Ca2+ channel. Muscle biopsies excised from three patients with HOPP carrying the R528H mutation of the dihydropyridine receptor showed a reduced sarcolemma KATP current that was not stimulated by magnesium adenosine diphosphate (MgADP; 50–100 μM) and was partially restored by cromakalim. In contrast, large KATP currents stimulated by MgADP were recorded in the healthy subjects. At channel level, an abnormal KATP channel showing several subconductance states was detected in the patients with HOPP. None of these were surveyed in the healthy subjects. Transitions of the KATP channel between subconductance states were also observed after in vitro incubation of the rat muscle with low-K+ solution. The lack of the sarcolemma KATP current observed in these patients explains the symptoms of the disease, i.e., hypokalemia, depolarization of the fibers, and possibly the paralysis following insulin administration. 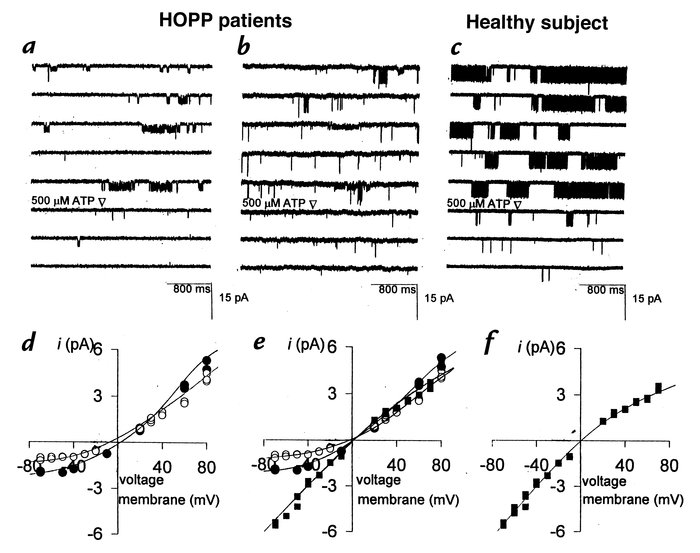