Atherosclerotic cardiovascular disease (ASCVD) affects more than 1 in 3 American adults. Hypercholesterolemia is a major treatable risk factor for ASCVD, yet many individuals fail to reach target levels of LDL-cholesterol (LDL-C) through the use of statins and lifestyle changes. The E3 ubiquitin ligase myosin regulatory light chain–interacting protein (MYLIP; also known as IDOL) is a recently identified regulator of the LDL receptor (LDLR) pathway. Genome-wide association studies (GWASs) in populations of mixed European descent have identified noncoding variants in the MYLIP region as being associated with LDL-C levels, but no underlying functional variants were pinpointed. In order to fine-map actual susceptibility variants, we studied a population demographically distinct from the discovery population to ensure a different pattern of linkage disequilibrium. Our analysis revealed that in a Mexican population, the nonsynonymous SNP rs9370867, which encodes the N342S amino acid substitution, is an underlying functional variant that was associated with high total cholesterol and accounted for one of the previous significant GWAS signals. Functional characterization showed that the Asn-encoding allele was associated with more potent LDLR degradation and decreased LDL uptake. Mutagenesis of residue 342 failed to affect intrinsic MYLIP E3 ligase activity, but it was critical for LDLR targeting. Our findings suggest that modulation of MYLIP activity can affect LDL-C levels and that pharmacologic inhibition of MYLIP activity might be a useful strategy in the treatment of dyslipidemia and ASCVD. 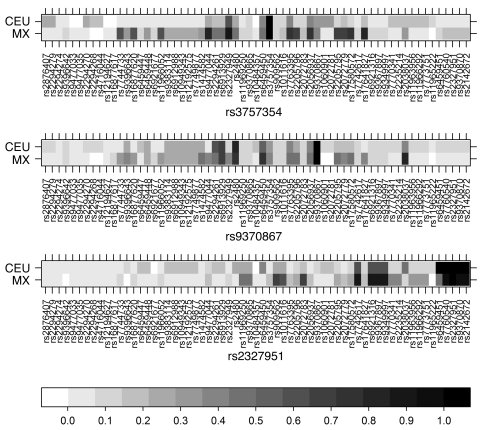 Shown is pairwise LD in in 120 Mexican controls (MX) and in the CEU sample. SNPs shown on the axis are ordered according to their bp position.