Lithium is the first-line therapy for bipolar disorder. However, its therapeutic target remains controversial. Candidates include inositol monophosphatases, glycogen synthase kinase-3 (GSK-3), and a β-arrestin-2/AKT/protein phosphatase 2A (β-arrestin-2/AKT/PP2A) complex that is known to be required for lithium-sensitive behaviors. Defining the direct target(s) is critical for the development of new therapies and for elucidating the molecular pathogenesis of this major psychiatric disorder. Here, we show what we believe to be a new link between GSK-3 and the β-arrestin-2 complex in mice and propose an integrated mechanism that accounts for the effects of lithium on multiple behaviors. GSK-3β (Gsk3b) overexpression reversed behavioral defects observed in lithium-treated mice and similar behaviors observed in Gsk3b+/– mice. Furthermore, immunoprecipitation of striatial tissue from WT mice revealed that lithium disrupted the β-arrestin-2/Akt/PP2A complex by directly inhibiting GSK-3. GSK-3 inhibitors or loss of one copy of the Gsk3b gene reduced β-arrestin-2/Akt/PP2A complex formation in mice, while overexpression of Gsk3b restored complex formation in lithium-treated mice. Thus, GSK-3 regulates the stability of the β-arrestin-2/Akt/PP2A complex, and lithium disrupts the complex through direct inhibition of GSK-3. We believe these findings reveal a new role for GSK-3 within the β-arrestin complex and demonstrate that GSK-3 is a critical target of lithium in mammalian behaviors.

Expression of -his in mouse brain. 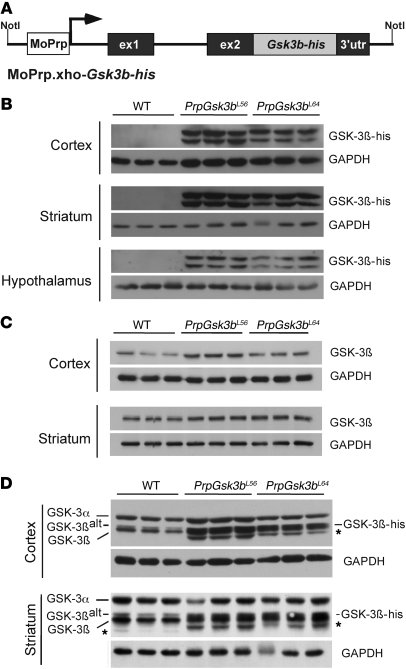 () Schematic of the -his transgene inserted downstream of MoPrp (MoPrp.xho). ex1, exon 1; utr, untranslated region. () GSK-3β-his protein expression in cortex, striatum, and hypothalamus of WT, , and transgenic mice was assessed by immunoblotting for 6X-his tag. Partial N-terminal proteolysis yielded a second, smaller band that reacted with C-terminal GSK-3 antibodies and was also observed for endogenous GSK-3β (see ), as reported previously (, ). GAPDH was used as the loading control. () Total GSK-3β protein expression in cortex and striatum of WT, , and mice detected with an N-terminal, GSK-3β–specific antibody. () GSK-3α and GSK-3β protein expression in cortex and striatum, detected with an antibody that recognizes the C-termini of both GSK-3α and GSK-3β antibody, confirms partial proteolysis of endogenous GSK-3β and GSK-3β-his (asterisks). An alternatively spliced form of endogenous GSK-3β is indicated (GSK-3βalt). GSK-3β-his migrates between the endogenous GSK-3β and GSK-3βalt forms.