Living or dying by RNA processing: caspase expression in NSCLC

Living or dying by RNA processing: caspase expression in NSCLC

Protein expression in humans is controlled by numerous RNA processing steps that occur between transcription of a gene and translation of protein. However, the importance of such regulatory steps to human diseases, especially cancer, is just now coming to light. Changes in the alternative splicing or stability of mRNA transcribed from genes involved in cell-cycle control, cell proliferation, and apoptosis has been linked to tumor formation and progression. Nevertheless, in the majority of these cases, the identity of the regulators that control the expression of such cancer-related genes is poorly understood. In this issue of the JCI, Goehe et al. demonstrate that heterogeneous nuclear ribonuclear protein family member L (hnRNP L), a member of the hnRNP family of RNA processing factors, is specifically phosphorylated in non–small cell lung cancer (NSCLC). The phosphorylated hnRNP L, in turn, promotes expression of the antiapoptotic form of caspase-9, thereby contributing to tumorigenesis.

Model for the regulation of caspase-9 mRNA expression by hnRNP L. 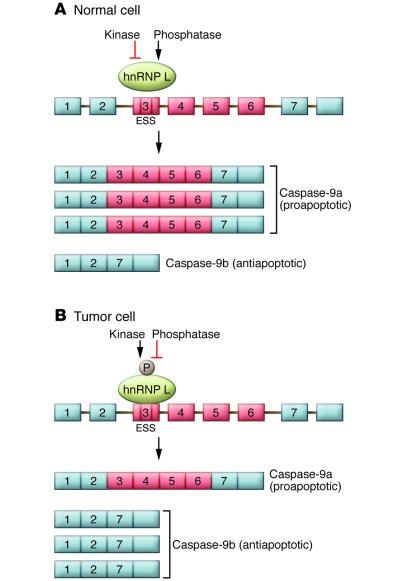 The caspase-9 pre-mRNA contains four variable exons (exons 3, 4, 5, and 6) that are differentially included or excluded to generate the longer caspase-9a or shorter caspase-9b mRNAs. () The work of Goehe et al. () indicates that in normal cells, a higher ratio of caspase-9a/9b mRNA is present, which leads to increased levels of the proapoptotic caspase-9a protein isoform. () In tumor cells, the four variable exons are skipped, leading to a lower ratio of caspase-9a/9b mRNA, which leads to increased levels of the antiapoptotic caspase-9b protein isoform. Goehe et al. show that regulation of the alternative RNA processing pattern of the caspase-9 mRNA is achieved by the differential phosphorylation of the hnRNP L protein. hnRNP L protein is largely unphosphorylated in normal cells, while in NSCLC cells, hnRNP L is phosphorylated at specific serine, threonine, and tyrosine residues. The differential phosphorylation pattern of hnRNP L could be regulated by cell type–specific kinases and/or phosphatases. Phosphorylation of hnRNP L Ser52, specifically in tumor cells, regulates the interaction of hnRNP L with caspase-9 RNA and regulates differential RNA processing of this transcript, as discussed in the text. ESS, exonic splicing silencer.