IL-15 receptor α (IL-15Rα) is a component of the heterotrimeric plasma membrane receptor for the pleiotropic cytokine IL-15. However, IL-15Rα is not merely an IL-15 receptor subunit, as mice lacking either IL-15 or IL-15Rα have unique phenotypes. IL-15 and IL-15Rα have been implicated in muscle phenotypes, but a role in muscle physiology has not been defined. Here, we have shown that loss of IL-15Rα induces a functional oxidative shift in fast muscles, substantially increasing fatigue resistance and exercise capacity. IL-15Rα–knockout (IL-15Rα–KO) mice ran greater distances and had greater ambulatory activity than controls. Fast muscles displayed fatigue resistance and a slower contractile phenotype. The molecular signature of these muscles included altered markers of mitochondrial biogenesis and calcium homeostasis. Morphologically, fast muscles had a greater number of muscle fibers, smaller fiber areas, and a greater ratio of nuclei to fiber area. The alterations of physiological properties and increased resistance to fatigue in fast muscles are consistent with a shift toward a slower, more oxidative phenotype. Consistent with a conserved functional role in humans, a genetic association was found between a SNP in the IL15RA gene and endurance in athletes stratified by sport. Therefore, we propose that IL-15Rα has a role in defining the phenotype of fast skeletal muscles in vivo. 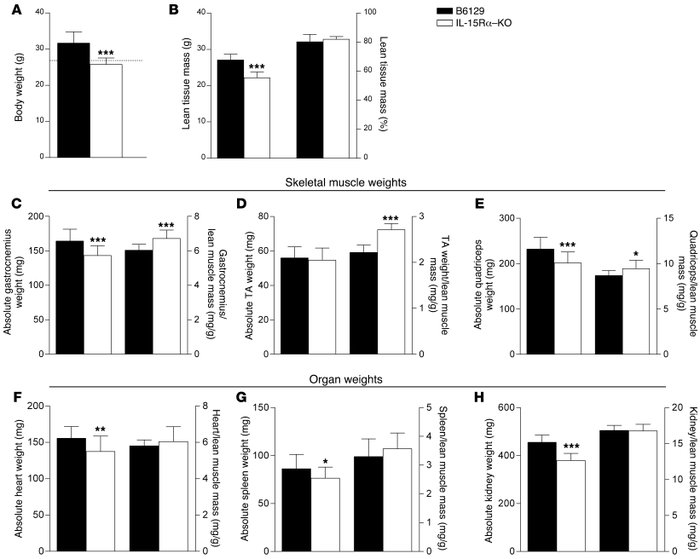