Hypertrophic cardiomyopathy (HCM) is a leading cause of sudden death in children and young adults. Abnormalities in several signaling pathways are implicated in the pathogenesis of HCM, but the role of the RAS-RAF-MEK-ERK MAPK pathway has been controversial. Noonan syndrome (NS) is one of several autosomal-dominant conditions known as RASopathies, which are caused by mutations in different components of this pathway. Germline mutations in RAF1 (which encodes the serine-threonine kinase RAF1) account for approximately 3%–5% of cases of NS. Unlike other NS alleles, RAF1 mutations that confer increased kinase activity are highly associated with HCM. To explore the pathogenesis of such mutations, we generated knockin mice expressing the NS-associated Raf1L613V mutation. Like NS patients, mice heterozygous for this mutation (referred to herein as L613V/+ mice) had short stature, craniofacial dysmorphia, and hematologic abnormalities. Valvuloseptal development was normal, but L613V/+ mice exhibited eccentric cardiac hypertrophy and aberrant cardiac fetal gene expression, and decompensated following pressure overload. Agonist-evoked MEK-ERK activation was enhanced in multiple cell types, and postnatal MEK inhibition normalized the growth, facial, and cardiac defects in L613V/+ mice. These data show that different NS genes have intrinsically distinct pathological effects, demonstrate that enhanced MEK-ERK activity is critical for causing HCM and other RAF1-mutant NS phenotypes, and suggest a mutation-specific approach to the treatment of RASopathies. 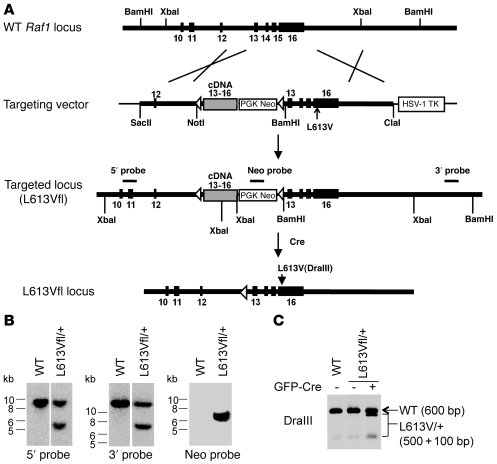 () Targeting strategy. Structures of the locus, targeting vector, mutant allele, and location of probes for Southern blotting are shown. () Correct targeting of ES cells. Genomic DNA from WT ES cells and PCR-positive L613Vfl/+ ES clones was digested with XbaI (5′ and Neo probe) or BamHI (3′ probe) and subjected to Southern blotting with 5′, 3′, or Neo probes. Blots with 5′ and 3′ probes were run on the same gel but were noncontiguous (white lines). () Expression of allele is inducible. RNA was isolated from WT and L613Vfl/+ ES cells with or without prior transfection of MSCV-Cre-GFP plasmid and reverse transcribed into cDNA. A PCR product, obtained by using primers within exon 11 and at the end of exon 16 of the cDNA, was digested with DraIII. Note that the mutant allele was silent until Cre was introduced, and then was expressed efficiently.