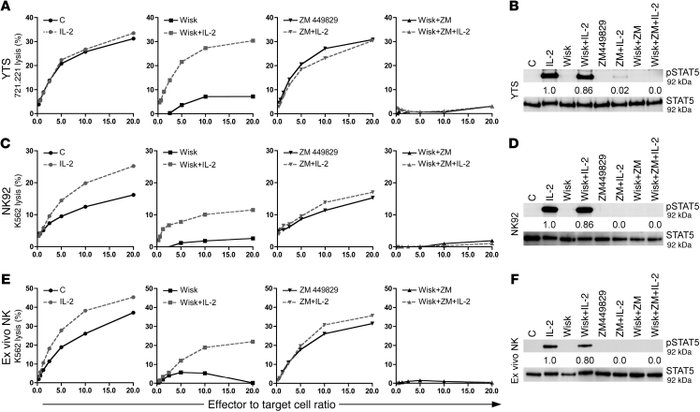 YTS ( and ), NK92 ( and ), and ex vivo NK ( and ) cells were control (C, circles), wiskostatin (Wisk, squares), ZM 449829 (downward triangles), or wiskostatin and ZM 449829 (Wisk+ZM, upward triangles) treated prior to addition of media (solid black line) or IL-2 (dashed gray line) for 30 minutes. Each column of graphs depicts the effect of IL-2 (dashed line) added to the respective control or inhibitor-treated cells (solid line). The control cytotoxicity for all of the treatments is in the left-most graph (black circles). Cytotoxic activity of treated cells was measured against 721 or K562 target cells in 4-hour 51Cr-release assays. Individual points represent the mean of triplicates, and individual experiments are representative of 2–5 repeats. (, , ) A portion of the cells prepared for cytotoxicity was used to prepare whole-cell lysates, which were evaluated for the presence of phosphorylated (top) and total (bottom) STAT5 by Western blot analysis. Total STAT5 was detected using the same membrane used for phosphorylated STAT5 after stripping and reprobing. Numbers beneath each lane represent densitometric ratios for pSTAT5 to total STAT5.