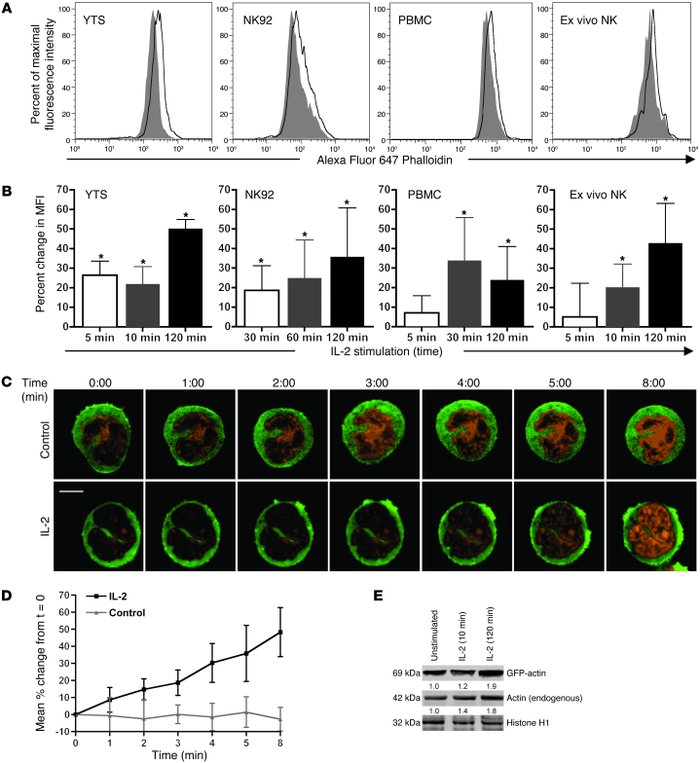 () YTS, NK92, PBMC, or ex vivo NK cells were treated with 125 U/ml of IL-2 for 30 minutes, fixed, permeabilized, and stained with phalloidin Alexa Fluor 647. Percentage of maximal fluorescence intensity of Alexa Fluor 647 is demonstrated for control (gray) and IL-2–treated (white) cells. In PBMCs, only the CD56+CD3– cells were selected. () Phalloidin MFI induced by IL-2 over that in control-treated cells according to time of in vitro IL-2 or vehicle exposure (error bars demonstrate SD; * < 0.05 compared with control-treated cells). () Distribution of actin-GFP in control-treated (top) or IL-2–treated (bottom) YTS GFP-actin cells using real-time confocal microscopy. GFP-actin fluorescence is depicted in green, and DRAQ5 DNA dye (nuclear material) is depicted in red. Time = 0:00 represents the addition of IL-2 or vehicle to the imaging chamber. Scale bar: 5 μm. () Calculated change from time = 0:00 in mean area intensity of peripheral GFP-actin over the first 8 minutes in control-treated cells (gray triangles) compared with IL-2–treated cells (black squares). Each point represents the mean ± SD from 10 cells, and the IL-2 and control data sets are significantly different ( = 0.0023) via a 2-tailed Mann-Whitney test. () Insoluble F-actin–rich cell fractions prepared from unstimulated, 10-minute, or 120-minute IL-2–stimulated YTS GFP-actin cells were evaluated by Western blot analysis for GFP-actin (top), endogenous actin (middle), and histone H1 (bottom). The numbers beneath the blots provide the densitometric ratio of the GFP or actin signal to that present in the unstimulated lane and are representative of 2 repeats.