Infection with influenza A virus represents a major public health threat worldwide, particularly in patients with asthma. However, immunity induced by influenza A virus may have beneficial effects, particularly in young children, that might protect against the later development of asthma, as suggested by the hygiene hypothesis. Herein, we show that infection of suckling mice with influenza A virus protected the mice as adults against allergen-induced airway hyperreactivity (AHR), a cardinal feature of asthma. The protective effect was associated with the preferential expansion of CD4–CD8–, but not CD4+, NKT cells and required T-bet and TLR7. Adoptive transfer of this cell population into allergen-sensitized adult mice suppressed the development of allergen-induced AHR, an effect associated with expansion of the allergen-specific forkhead box p3+ (Foxp3+) Treg cell population. Influenza-induced protection was mimicked by treating suckling mice with a glycolipid derived from Helicobacter pylori (a bacterium associated with protection against asthma) that activated NKT cells in a CD1d-restricted fashion. These findings suggest what we believe to be a novel pathway that can regulate AHR, and a new therapeutic strategy (treatment with glycolipid activators of this NKT cell population) for asthma. 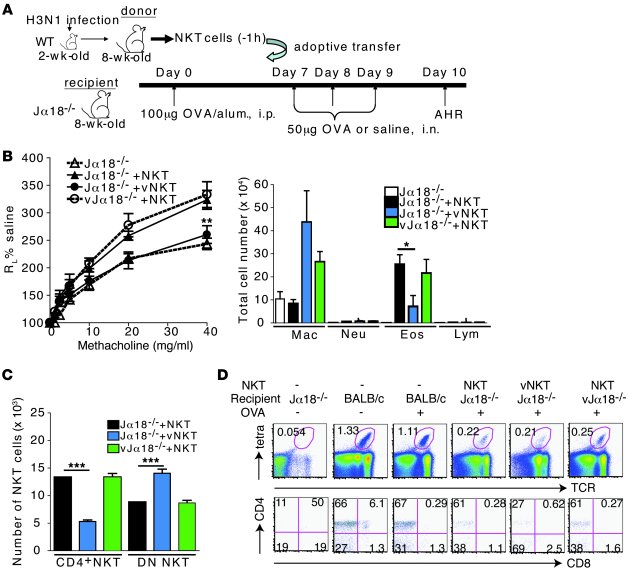 () Schematic showing the protocol for adoptive transfer of NKT cells to OVA-immunized α recipients. The donor mice were infected with H3N1 or mock infected at 2 weeks of age. Six weeks after infection, NKT cells were purified and adoptively transferred into OVA-sensitized α mice, which were then challenged with OVA and assessed for AHR. () Adoptive transfer of H3N1-exposed NKT cells (vNKT) to α mice failed to reconstitute OVA-induced AHR (measured as lung resistance in response to methacholine challenge) (left panel). Adoptive transfer of NKT cells from mock-infected mice (NKT) fully reconstituted AHR. H3N1 infection at 2 weeks of age of α mice (vα) and reconstitution at 8 weeks of age with NKT cells from mock-infected mice did not protect against AHR ( = 8–10 per group). BAL fluid was collected and analyzed (right panel). * < 0.05 and ** < 0.01, compared with α + NKT group. ( and ) Lung cells were isolated from the recipients after measurement of AHR, and the absolute numbers () and percentages () of lung CD4+ or CD4–CD8– (DN) NKT subsets were assessed by FACS. Upper panels show dot plots for NKT cells in lung leukocytes. After gating on the NKT cells, the cells were analyzed for CD4 and CD8 (lower panels). *** < 0.001 compared with WT NKT group. Data are representative of 3 independent experiments.