Glaucoma is one of the most common neurodegenerative diseases. Despite this, the earliest stages of this complex disease are still unclear. This study was specifically designed to identify early stages of glaucoma in DBA/2J mice. To do this, we used genome-wide expression profiling of optic nerve head and retina and a series of computational methods. Eyes with no detectable glaucoma by conventional assays were grouped into molecularly defined stages of disease using unbiased hierarchical clustering. These stages represent a temporally ordered sequence of glaucoma states. We then determined networks and biological processes that were altered at these early stages. Early-stage expression changes included upregulation of both the complement cascade and the endothelin system, and so we tested the therapeutic value of separately inhibiting them. Mice with a mutation in complement component 1a (C1qa) were protected from glaucoma. Similarly, inhibition of the endothelin system with bosentan, an endothelin receptor antagonist, was strongly protective against glaucomatous damage. Since endothelin 2 is potently vasoconstrictive and was produced by microglia/macrophages, our data provide what we believe to be a novel link between these cell types and vascular dysfunction in glaucoma. Targeting early molecular events, such as complement and endothelin induction, may provide effective new treatments for human glaucoma. 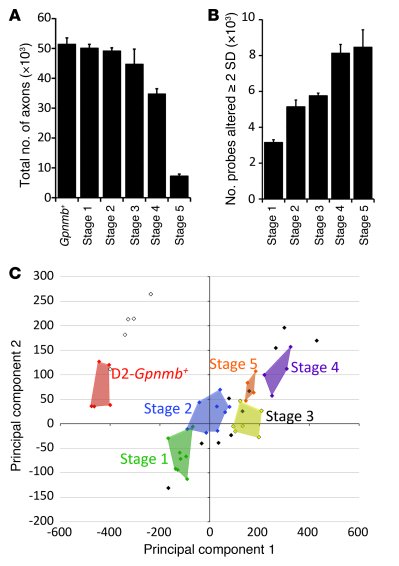 () Overall, axon number decreased, from stage 1 to 5. However, for stages 1–3, there was no significant axon loss with respect to D2- control eyes ( > 0.1). () The number of probe sets altered by at least 2 SDs (with respect to D2- control) increased with disease stage. () PCA showed that stages 1–5 occupy essentially non-overlapping territories. D2- control samples that did not cluster (open diamonds, upper left quadrant) were clearly distinct from DBA/2J glaucoma samples (filled colored diamonds). DBA/2J samples that did not cluster are shown as filled black diamonds.