Mucosal antibody responses play a major role in mediating homeostasis with the intestinal flora. It has been suggested that imbalance in the IgA+ and IgG+ intestinal B cell repertoire may be associated with the development of diseases such as inflammatory bowel disease. Despite this, little is known about the antibody specificity of human intestinal plasmablasts. Here, we have determined the reactivity profile of single isolated IgA+ and IgG+ plasmablasts from human terminal ileum using antibody cloning and in vitro expression. We found that approximately 25% of intestinal IgA and IgG plasmablast antibodies were polyreactive; the majority were antigen-specific. Antigen specificity was not only directed against enteropathogenic microbes but also against commensal microbes and self antigens. Regardless of their reactivity, all intestinal antibodies were somatically mutated and showed signs of antigen-mediated selection, suggesting that they developed from antigen-specific B cell responses. Together, our data indicate that antigen-specific immune responses to intestinal microbes are largely responsible for the maintenance of intestinal homeostasis and thus provide a basis for understanding the deregulated immune responses observed in patients with inflammatory bowel disease. 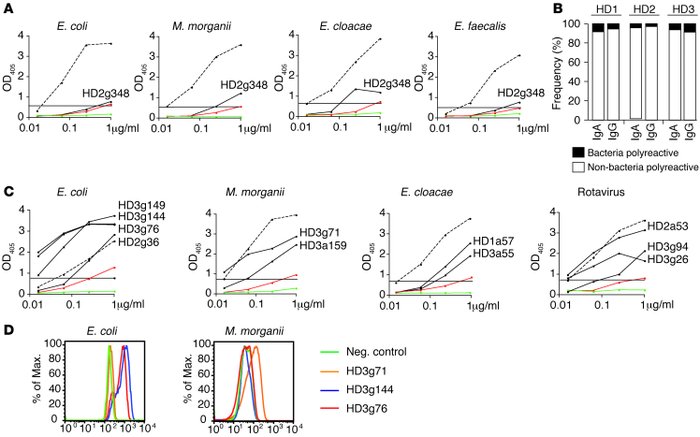