Retinoblastoma (RB; encoded by RB1) is a tumor suppressor that is frequently disrupted in tumorigenesis and acts in multiple cell types to suppress cell cycle progression. The role of RB in tumor progression, however, is poorly defined. Here, we have identified a critical role for RB in protecting against tumor progression through regulation of targets distinct from cell cycle control. In analyses of human prostate cancer samples, RB loss was infrequently observed in primary disease and was predominantly associated with transition to the incurable, castration-resistant state. Further analyses revealed that loss of the RB1 locus may be a major mechanism of RB disruption and that loss of RB function was associated with poor clinical outcome. Modeling of RB dysfunction in vitro and in vivo revealed that RB controlled nuclear receptor networks critical for tumor progression and that it did so via E2F transcription factor 1–mediated regulation of androgen receptor (AR) expression and output. Through this pathway, RB depletion induced unchecked AR activity that underpinned therapeutic bypass and tumor progression. In agreement with these findings, disruption of the RB/E2F/nuclear receptor axis was frequently observed in the transition to therapy resistance in human disease. Together, these data reveal what we believe to be a new paradigm for RB function in controlling prostate tumor progression and lethal tumor phenotypes.

RB loss is overrepresented in CRPC and metastatic PCa and is associated with tumor recurrence. 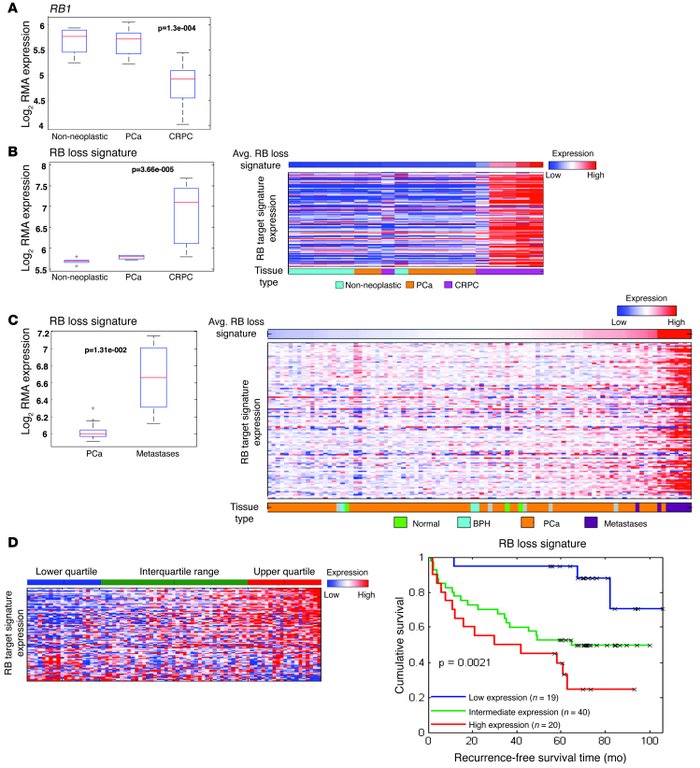 () RB expression was determined in non-neoplastic tissue, localized PCa, and CRPC from an established dataset () plotted as log of robust multichip average (RMA) expression. For all box plots, the red line is the median, the bottom and top of the box are the 25th and 75th percentiles, respectively, and the whiskers capture data points within 1.5 interquartile range (IQR). Outliers beyond 1.5 IQR are plotted individually with gray plus symbols. () The RB loss signature was determined from data in , and plotted as a box and whisker plot and heatmap. In the heatmap, tissue samples were ordered from left to right based on relative representation of the RB loss signature (above). Tissue type is provided below. () RB loss signature in primary PCa and metastatic PCa, from data first described elsewhere (). Also shown is RB loss signature across normal, benign prostate epithelia (BPH), localized PCa, and metastatic specimens. As in , tissue samples were ordered from left to right based on relative level of the RB loss signature, and sample type is provided below. Indicated values were calculated using the Student’s test. () Quartile analyses were used to determine the impact of RB loss on recurrence-free survival using the dataset in . See also Supplemental Figure 8.