KRAS is one of the most frequently mutated human oncogenes. In some settings, oncogenic KRAS can trigger cellular senescence, whereas in others it produces hyperproliferation. Elucidating the mechanisms regulating these 2 drastically distinct outcomes would help identify novel therapeutic approaches in RAS-driven cancers. Using a combination of functional genomics and mouse genetics, we identified a role for the transcription factor Wilms tumor 1 (WT1) as a critical regulator of senescence and proliferation downstream of oncogenic KRAS signaling. Deletion or suppression of Wt1 led to senescence of mouse primary cells expressing physiological levels of oncogenic Kras but had no effect on wild-type cells, and Wt1 loss decreased tumor burden in a mouse model of Kras-driven lung cancer. In human lung cancer cell lines dependent on oncogenic KRAS, WT1 loss decreased proliferation and induced senescence. Furthermore, WT1 inactivation defined a gene expression signature that was prognostic of survival only in lung cancer patients exhibiting evidence of oncogenic KRAS activation. These findings reveal an unexpected role for WT1 as a key regulator of the genetic network of oncogenic KRAS and provide important insight into the mechanisms that regulate proliferation or senescence in response to oncogenic signals. 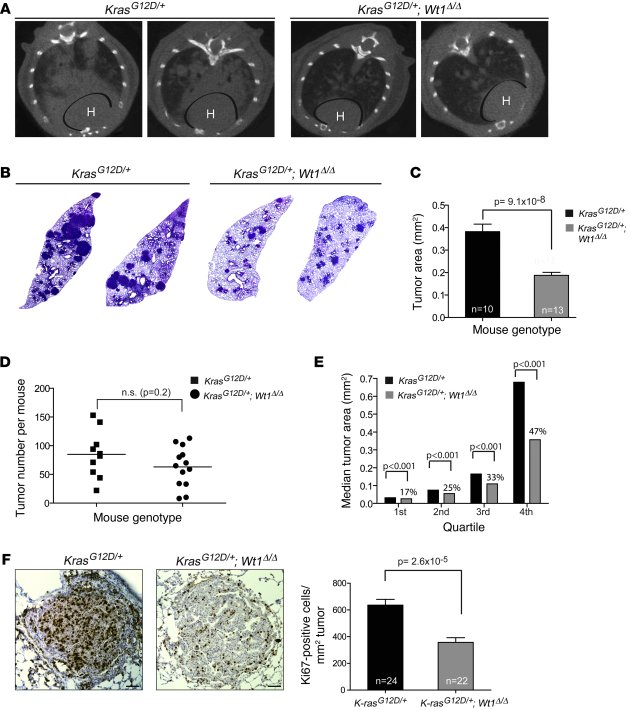 () Representative microCT scans of tumors in and treated with AdCre and allowed to develop tumors for 16 weeks. H. heart. () Representative H&E-stained sections for and ΔΔ lungs (montage of ×5 magnification of lung sections). () Quantification of tumor area in and ΔΔ groups. () Dot plot showing mean number of tumors per mouse in ( = 10) and ΔΔ ( = 13) mice. Data points indicate total number of tumors per mouse. () Distribution of the total number of tumors into quartiles for and ΔΔ genotypes, based on their size. Median was calculated at each quartile, and values for the differences are indicated ( < 0.001). In addition, the percentage of the difference between the 2 groups was calculated. Percentage differences at each quartile are 17% (first), 25% (second), 33% (third), and 47% (fourth). () Representative images of tumors from and ΔΔ genotypes stained with the cell proliferation marker Ki67. Scale bars: 300 μm. Graph shows number of Ki67-positive cells per mm2 of tumor. Mice were infected with AdCre for 10 weeks, and all tumors included in the analysis (, = 24; ΔΔ, = 22) were confirmed to have recombination of the allele. values are for a 2-tailed test. Error bars indicate mean ± SEM.