Many common disorders of pregnancy are attributed to insufficient invasion of the uterine lining by trophoblast, fetal cells that are the major cell type of the placenta. Interactions between fetal trophoblast and maternal uterine NK (uNK) cells — specifically interactions between HLA-C molecules expressed by the fetal trophoblast cells and killer Ig-like receptors (KIRs) on the maternal uNK cells — influence placentation in human pregnancy. Consistent with this, pregnancies are at increased risk of preeclampsia in mothers homozygous for KIR haplotype A (KIR AA). In this study, we have demonstrated that trophoblast expresses both paternally and maternally inherited HLA-C surface proteins and that maternal KIR AA frequencies are increased in affected pregnancies only when the fetus has more group 2 HLA-C genes (C2) than the mother. These data raise the possibility that there is a deleterious allogeneic effect stemming from paternal C2. We found that this effect also occurred in other pregnancy disorders (fetal growth restriction and recurrent miscarriage), indicating a role early in gestation for these receptor/ligand pairs in the pathogenesis of reproductive failure. Notably, pregnancy disorders were less frequent in mothers that possessed the telomeric end of the KIR B haplotype, which contains activating KIR2DS1. In addition, uNK cells expressed KIR2DS1, which bound specifically to C2+ trophoblast cells. These findings highlight the complexity and central importance of specific combinations of activating KIR and HLA-C in maternal-fetal immune interactions that determine reproductive success.

Representative and haplotypes illustrate centromeric ( and ) and telomeric ( and ) gene regions, with the HLA-C ligands (C1 and C2) depicted above their cognate receptors. 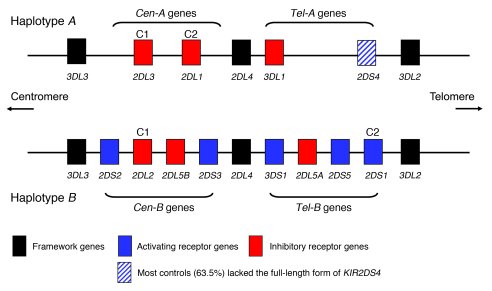