Adriamycin (ADR) is a commonly used chemotherapeutic agent that also produces significant tissue damage. Mutations to mitochondrial DNA (mtDNA) and reductions in mtDNA copy number have been identified as contributors to ADR-induced injury. ADR nephropathy only occurs among specific mouse inbred strains, and this selective susceptibility to kidney injury maps as a recessive trait to chromosome 16A1-B1. Here, we found that sensitivity to ADR nephropathy in mice was produced by a mutation in the Prkdc gene, which encodes a critical nuclear DNA double-stranded break repair protein. This finding was confirmed in mice with independent Prkdc mutations. Overexpression of Prkdc in cultured mouse podocytes significantly improved cell survival after ADR treatment. While Prkdc protein was not detected in mitochondria, mice with Prkdc mutations showed marked mtDNA depletion in renal tissue upon ADR treatment. To determine whether Prkdc participates in mtDNA regulation, we tested its genetic interaction with Mpv17, which encodes a mitochondrial protein mutated in human mtDNA depletion syndromes (MDDSs). While single mutant mice were asymptomatic, Prkdc/Mpv17 double-mutant mice developed mtDNA depletion and recapitulated many MDDS and ADR injury phenotypes. These findings implicate mtDNA damage in the development of ADR toxicity and identify Prkdc as a MDDS modifier gene and a component of the mitochondrial genome maintenance pathway.

Mapping and identification of the mutation. 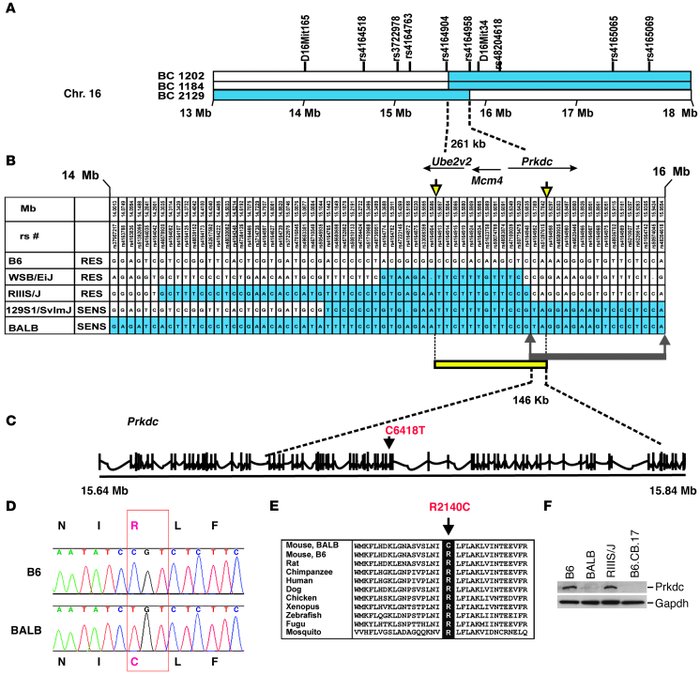 () Meiotic mapping refines the ADR nephropathy locus to a 261-kb interval containing , , and . The critical recombinants in 3 backcross (BC) mice are shown, with segments homozygous for BALB alleles indicated in blue and segments with BALB/B6 genotypes indicated in white. The location of genotyped markers is indicated above the haplotypes. Chr., chromosome. () Haplotype comparison between susceptible (BALB, 129S1/SvImJ) and resistant (RES) strains (B6, WSB/EiJ, and RIIIS/J) refines the locus to a 146-kb region. The haplotypes shared with the sensitive (SENS) BALB strain are highlighted in blue. The location of meiotic recombinants is indicated by the downward yellow arrows. The minimal interval implicated by haplotype analysis is marked by the upward gray arrows. The intersection between the intervals delineated by meiotic mapping (yellow bar) and haplotype analysis (gray bar) enabled refinement of the ADR nephropathy locus to a 146-kb region within the gene. () Genomic structure of . Exons are identified by vertical tick marks, and the C6418T is in exon 48. () Chromatogram showing the C6418T variant resulting in a R2140C substitution. () The arginine in position 2140 is highly conserved among species. () A Western blot of total kidney lysates demonstrates markedly reduced Prkdc expression in BALB mice, with levels comparable to those of the B6.CB.17 mice that harbor the allele. Positions of Prkdc and Gapdh (loading control) are indicated by bars.