Leptin is an adipose-derived hormone that signals to inform the brain of nutrient status; loss of leptin signaling results in marked hyperphagia and obesity. Recent work has identified several groups of neurons that contribute to the effects of leptin to regulate energy balance, but leptin receptors are distributed throughout the brain, and the function of leptin signaling in discrete neuronal populations outside of the hypothalamus has not been defined. In the current study, we produced mice in which the long form of the leptin receptor (Lepr) was selectively ablated using Cre-recombinase selectively expressed in the hindbrain under control of the paired-like homeobox 2b (Phox2b) promoter (Phox2b Cre Leprflox/flox mice). In these mice, Lepr was deleted from glucagon-like 1 peptide–expressing neurons resident in the nucleus of the solitary tract. Phox2b Cre Leprflox/flox mice were hyperphagic, displayed increased food intake after fasting, and gained weight at a faster rate than wild-type controls. Paradoxically, Phox2b Cre Leprflox/flox mice also exhibited an increased metabolic rate independent of a change in locomotor activity that was dependent on food intake, and glucose homeostasis was normal. Together, these data support a physiologically important role of direct leptin action in the hindbrain.

Quantification of Phox2b Cre deletion of Lepr in the hindbrain. 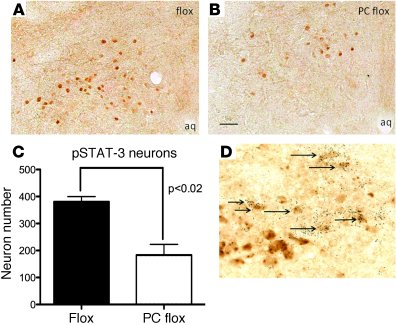