Pain imaging in health and disease — how far have we come?

Pain imaging in health and disease — how far have we come?

Since modern brain imaging of pain began 20 years ago, networks in the brain related to pain processing and those related to different types of pain modulation, including placebo, have been identified. Functional and anatomical connectivity of these circuits has begun to be analyzed. Imaging in patients suggests that chronic pain is associated with altered function and structural abnormalities in pain modulatory circuits. Moreover, biochemical alterations associated with chronic pain are being identified that provide information on cellular correlates as well as potential mechanisms of structural changes. Data from these brain imaging studies reinforce the idea that chronic pain leads to brain changes that could have functional significance.

Localization of gray matter decreases in chronic pain conditions that have been reported for insula (), ACC (), and PFC () (for references, see text). 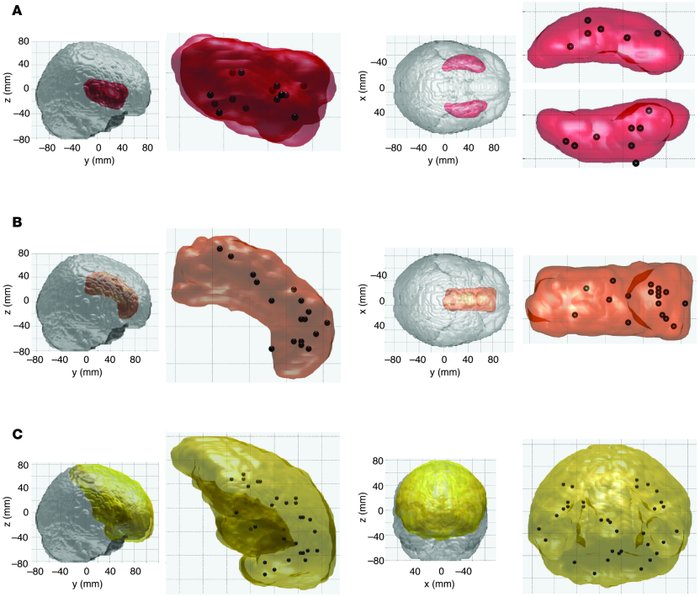 Each sphere represents a peak of gray matter decrease. Note that more than one peak per region was included when reported in a study. Coordinates are in MNI standard stereotaxic space. refers to left-right (negative numbers in the left hemisphere, positive numbers in the right hemisphere). The anterior commissure corresponds to 0 mm in all three directions. In , gray matter decreases are only depicted if they are located in the PFC, while the yellow volume encompasses all of frontal cortex, including precentral gyrus. Similarly, decreases in supplementary motor area and premotor cortex are not included. The volume for the insula (red) and frontal cortex (yellow) are based on the MNI Structural Atlas (, ), thresholded so that every voxel in the volume falls within the respective brain region (insula or frontal cortex) in at least 5% of individuals. The ACC volume (orange) is based on the Harvard-Oxford Cortical Structural Atlas, equally thresholded at 5%. The MNI Structural Atlas and the Harvard-Oxford Cortical Structural Atlas were used as implemented in fslview of the fsl software suite (). The size of the spheres representing the localization of gray matter decreases is arbitrary.