Disruption of the FA pathway results in cytokinesis failure and an increase in multinucleated cells. 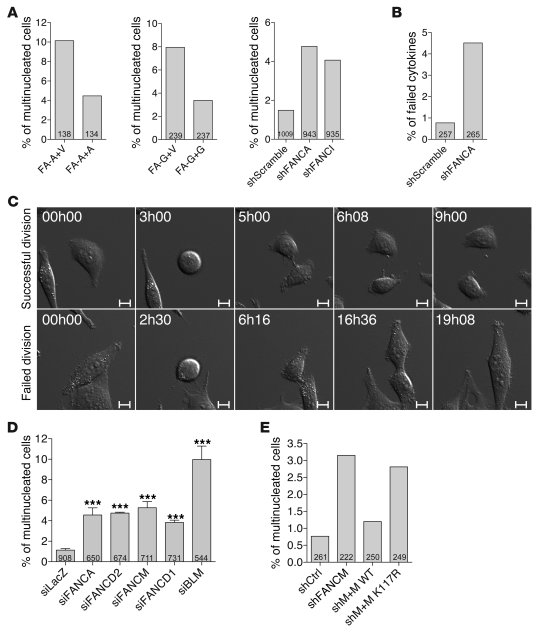 () FA-A and FA-G fibroblasts and corrected counterparts, as well as shScramble, shFANCA, and shFANCI cells, were stained for microtubules and DNA. Mononucleated as well as bi- and multinucleated cells were scored, and the frequency of multinucleated cells (i.e., bi- and multi-) for each type was calculated. () Frequency of cytokinesis failure in shScramble and shFANCA cells, followed for 24 hours by live cell imaging. () Still frames of representative successful and failed cytokinesis; see Supplemental Movies 1 and 2, respectively. Time is indicated in hours and minutes. Scale bars: 10 μM. () HeLa cells transiently knocked down for a panel of Fanconi genes as well as were analyzed for the presence of bi- and multinucleated cells. Data are mean and SEM from 3 independent experiments (every siRNA was independently compared with siLacZ). () Control cells and cells stably knocked down for FANCM, complemented with the WT FANCM cDNA, and expressing FANCMK117R were analyzed for the presence of bi- and multinucleated cells. Numbers within bars denote number of mitotic cells analyzed. *** < 0.01, Student’s test.